The more compact and massive an object, the stronger the gravitational influence it exerts on its direct neighbourhood – and the stronger the deviations between general relativity’s predictions and those of Newtonian gravity.

This chapter of Elementary Einstein is devoted to the most compact objects there are. First we’ll examine neutron stars, super-dense remnants of stars, and their visible avatars, pulsars. Secondly, we’ll discuss a class of compact objects whose existence was predicted using general relativity: black holes. Black holes started out as a rather exotic theoretical idea, but nowadays, they’re an important building block of astrophysical models (for stellar evolution and for the active nuclei of certain galaxies).

Stars that are between five and forty times as massive as our sun end their lives in a spectacular way – not with a whimper, but a bang! Once their nuclear fuel is exhausted, there is an gigantic explosion called a supernova, in which the outer layers of the star are ejected into space, leading […] 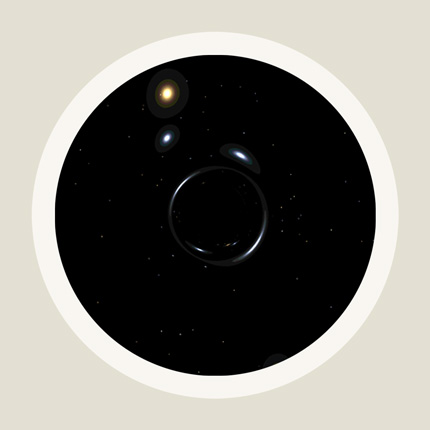 When even more massive stars explode in a supernova, the collapsing central region will generically have so much mass that even neutron matter cannot halt the collapse. The collapse continues, and when this happens, a black hole is born (more precisely: a stellar black hole with one to ten times the mass of our sun). […] 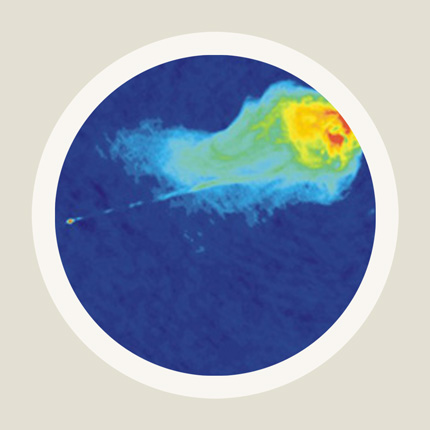 Soon after the beginning of radio astronomy came the discoveries of ever more variants of active galactic nuclei. An example is shown below: The image illustrates radio observations, showing a “radio galaxy” (the tiny dot in the center) which shoots beams of highly energetic particles to the left and to the right. When they collide […]

In the physics of neutron stars and black holes, we clearly see the central role of general relativity in modern astrophysics. Relativistic physics is necessary to fully understand the most energetic phenomena in the universe – from supernova explosions of stars to the driving force that makes some active galactic nuclei the brightest objects in […]

supernova
Highly energetic explosion that ends the life of stars with more than about ten solar masses. In this explosion, the outer layers of the stars are ejected into space, while the core regions collapse to form a neutron star or even a black hole.
stars (star)
A cosmic gas ball that is massive enough for pressure and temperatur in its core to reach values where self-sustained nuclear fusion reactions set in. The energy set free in these reactions makes stars into very bright sources of light and other forms of electromagnetic radiation. Once the nuclear fuel is exhausted, the star becomes a white dwarf, a neutron star or a black hole.
neutron
Particle that is electrically neutral and comparatively massive; the atomic nuclei consist of neutrons and protons. Neutrons are not elementary particles, they are compound particles consisting of quarks that are bound together through the strong nuclear interaction . Collectively, neutrons, protons and a number of similar particles are called baryons. Neutron stars are mainly made of neutrons.
general relativity (general theory of relativity)
Albert Einstein's theory of gravity; a generalization of his special theory of relativity. For information about the concepts and applications of this theory, we recommend the chapter general relativity of our introductory section Elementary Einstein. Further information about many different aspects of general relativity and its applications can be found in our section Spotlights on relativity.
force

black holes (black hole)
Region in space where a sufficient amount of mass is concentrated so that it forms a gravitational prison - a region into which matter or light can enter from the outside, but from which nothing that has once entered can ever leave. Basic information on this key phenomenon of Einstein's general theory of relativity can be found in the chapter Black holes & Co. of Elementary Einstein. Selected aspects of the physics of black holes and neutron stars are described in the category Black holes & Co. of our Spotlights on relativity. In Einstein's theory, black holes are truly black, due to the fact that no radiation or light can ever escape them. Once quantum theory is taken into account, this assumption no longer holds - on the contrary, it seems as if black holes should emit so-called Hawking radiation. However, for astrophysical black holes (that typically have more or even much more than one solar mass), that radiation would be undetectable, even if we could transport today's most sensitive sensors into the immediate vicinity of the black hole.