When even more massive stars explode in a supernova, the collapsing central region will generically have so much mass that even neutron matter cannot halt the collapse. The collapse continues, and when this happens, a black hole is born (more precisely: a stellar black hole with one to ten times the mass of our sun).

The black hole itself isn’t a solid object, but rather a region of space with very special properties: Matter or light can enter that region from the outside, but nothing that has entered can ever return. The border separating this region from the rest of the world is called the event horizon or, more simply, the horizon of the black hole. In the simplest case, it is shaped like the surface of a sphere. Whatever enters through this surface can never return to the outside world.

As the name implies, an outside observer will receive no light from a black hole. However, if you could come close enough, you could notice how its presence deflects the light of far-away objects behind it. A hypothetical example can be seen on the following pictures. The first shows a region of the sky, as seen by an astronaut drifting through space:

The next image shows the same region of the sky, with the same stars; now, however, there’s a black hole with the same mass as our sun, sitting in space 500,000 kilometres (300,000 miles) away from our hypothetical astronaut:

To the best of their knowledge, terrestrial astronomers are significantly further (more than a thousand light years) away from the nearest stellar black hole – a comforting thought, in a way. They need to look at indirect signs to deduce the presence of a black hole. Luckily, these objects exert a strong influence on their immediate surroundings, for instance by deflecting the movements of nearby stars. Black holes can also attract gas from a stellar neighbor, which then swirls into the black hole in the form of an ultra-hot accretion disk (which gives of strong X-ray radiation due to its high temperature). Whenever such observations indicate the presence of a massive object, too compact to be a neutron star, astronomers are looking at a black hole candidate. 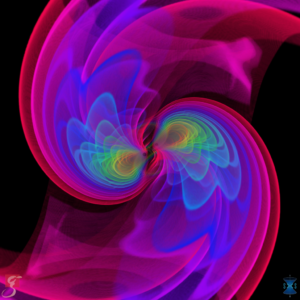 There’s a good chance that the first gravitational waves to be detected here on earth will be those from the collision and merger of two orbiting stellar black holes, or neutron stars.

merger
A merger occurs as a consequence of an inspiral, when two black holes collide to form one single bigger black hole. The emission of gravitational waves peaks during a merger.
waves (wave)

Only a small part of astronomical observations is concerned with visible light, in other words: with electromagnetic radiation visible to the human eye. In order to visualize obervations made at invisible wave-length, such as infra-red light, radio waves or X-rays, the different wave-lengths are mapped to visible colours following some arbitrarily chosen scheme.

Similarly, physical quantities that are not connected with electromagnetic radiation can be mapped to colours; for instance, one can produce images of a star's interior where different colours stand for different densities.