Soon after the beginning of radio astronomy came the discoveries of ever more variants of active galactic nuclei. An example is shown below: 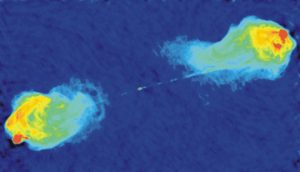 The image illustrates radio observations, showing a “radio galaxy” (the tiny dot in the center) which shoots beams of highly energetic particles to the left and to the right. When they collide with intergalactic gas, these beams transfer their energy to the gas molecules. This results in huge bubbles that give off radio waves which are visible to telescopes on Earth (left and right).

But what is the source of energy for these and other active galaxies? After their discovery in the 1960s, it soon became clear that only one source fit the bill: matter falling toward a compact mass and heating up by friction. However, in order to explain the observed phenomena, the central mass would have to be extremely massive and compact, which again left pretty much a single type of candidate object: supermassive black holes with more than a million solar masses.

Astronomers now believe that supermassive black holes in galactic core regions are the rule rather than the exception – not only in active galaxies, but also in rather quiet ones such as our own Milky Way!