Relativity and the Quantum / Elementary Tour part 1: Relativity in the micro-world

Quantum theory and relativity theory are two products of the early 20th century, developed in parallel. Not surprisingly, physicists early on began thinking about the possibility of combining the two. Could one, for instance, formulate a relativistic theory of quantum particles?

For special relativity, such thoughts were the beginning of a success story that continues until the present day. The original models of quantum mechanics dealt with point particles following the laws of classical, pre-Einsteinian mechanics. The first formulations of a relativistic quantum mechanics, substituting the laws of special relativistic mechanics for the classical ones, resulted in a stunning prediction. For every type of relativistic quantum particle, there should be a kind of mirror-image partner species – a corresponding type of anti-particle. Antiparticles have the same mass as their partner particles, but opposite charges. For instance, in a world where electrons exist which carry negative electric charge, relativistic quantum theory predicts the existence of anti-electrons with the same mass but a positive electric charge. The detection of such positrons was one of the great triumphs of the theory.

Soon, it became clear that the first relativistic version of quantum mechanics was insufficient. In order to include interactions, mediated by quantum forces, it became necessary to generalize the model. In relativistic quantum field theories, not only the matter particles, but also the forces acting between them obey quantum laws. For every force, there exist corresponding particles that act to transmit the force’s influence. For instance, in quantum field theories, the electric repulsion between two electrons is caused by the exchange of photons flitting back and forth. The emission and absorption of these “carrier particles of the electromagnetic force” are responsible for the electromagnetic interaction between one electron and another.

Quantum field theories are the basis of modern particle physics. The following photograph shows the scientists involved in constructing and running the ZEUS detector, one of the experiments at the research centre DESY in Northern Germany. Behind them is the detector itself – a gigantic construction designed to observe in detail the collisions of particles brought about in a specially designed particle accelerator: 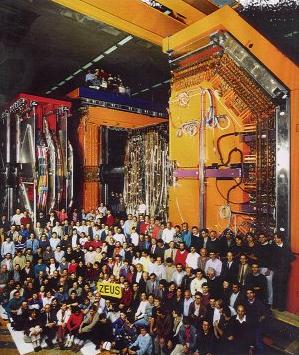 ZEUS Detector at the DESY, with team © DESY

The fundamental standard model of particle physics describes the interactions of elementary particles by means of three fundamental forces. This state-of-the-art theory, a the veteran of many successful experimental tests with detectors like the one shown above, is a variety of relativistic quantum field theory. Current particle physics is based on the successful union of quantum theory and Einstein’s special theory of relativity.

The framework for formulating the physical laws that govern the world at microscopic length-scales - the physics of the micro-world, for instance of atoms, atomic nuclei or elementary particles, but also the physics of ultra-precise measurements such as those made by gravitational wave detectors.

The laws of quantum theory are fundamentally different from our everyday experience and from those of classical physics.

The first unusual feature is that, in many cases, quantum theory merely allows statements about probabilities. For instance, in classical physics, one can assign to every particle, at every point in time, a location and a velocity. Whosoever can measure those quantities precisely can, in principle, predict where the particle in question can be found at every point in the future. In quantum theory, all one can assign to a system of particles is an abstract quantum state from which can be derived no precise predictions, but merely the probabilities for detecting a specific particle at a given time in a given place. Whether or not one will really find the particle at that location is governed by chance.

The second unusual feature is a fundamental restriction placed on the exactness of certain measurements (Heisenberg uncertainty relation). For instance, the more precise one measures a particle's location, the less definite any statements one can make about its velocity.

The third feature is how quantum theory came by its name: A number of physical quantities in nature come in little packets, in quanta. For instance, according to quantum theory, electromagnetic radiation is made of tiny quanta of energy called photons.

Examples for quantum theories are quantum mechanics and relativistic quantum field theories such as Quantum electrodynamics or other parts of the standard model of particle physics.

Interactions are all the different ways in which elementary or compound particles can influence each other. In elementary particle physics, "interaction" and "force" are used synonymously.

In the standard model of elementary particles, there are three fundamental interactions: electromagnetism, the strong nuclear force and the weak nuclear force. For another interaction, gravity, there is no quantum description yet.

field
A field describes how a physical quantity is distributed in space and time. For instance, the area where electric forces act on a test particle is subject to an electric field. Or the gravitational forces which act on the mass of a test body define a gravitational field. In general a field contains energy, occupies space and can change over time.
elementary particles (elementary particle)
Within the commonly accepted models of physics, certain particles are not built of even more fundamental sub-particles - they are themselves elementary. Examples for elementary particles are electrons, quarks and neutrinos, while particles such as protons or neutrons consist of sub-units and are thus not elementary. The study of elementary particles is called particle physics, under which keyword some more information about the theoretical framework of elementary particles can be found.
electron
Low-mass elementary particle with negative electric charge. The atoms that are the constituents of everyday matter each consists of a nucleus surrounded by a shell of electrons.
electrons (electron)
Low-mass elementary particle with negative electric charge. The atoms that are the constituents of everyday matter each consists of a nucleus surrounded by a shell of electrons.
electromagnetic force (electromagnetism)
Electromagnetism is the totality of all phenomena associated with the presence of electric charges, such as the electric force, magnetic force or electromagnetic waves. The basic laws of electromagnetism are Maxwell's equations. In the context of special relativity it becomes clear that electric and magnetic forces are relative - which one of them is active in a given situation depends on the observer. Say that, from the point of view of one observer, the attractive force between an electric conductor and a moving charged particle is purely electric in nature - nevertheless, for a moving observer at rest with respect to that particle, it is purely magnetic. Just as, in special relativity, it makes sense to talk of spacetime as a whole, seeing that it depends on the observer how that spacetime is then split into space and time, it makes sense to talk collectively about "the electromagnetic force", leaving it to the different observers to split this electromagnetic force into electric or magnetic parts.
electric charge
The charge associated with electromagnetism: a property of objects that determines the strength of the electric force with which they act on other charged objects, and the strength of electric forces by which other such objects act on them. Moving electric charges produce a magnetic field, and are influenced by such fields.
classical
In physics, the word is used with two meanings. First of all, it denotes physical models or theories that take into account neither the effects of Einstein's theories of relativity nor those of quantum physics, for example classical mechanics. However, it is also used to denote models or theories that are not formulated in the framework of quantum physics; in that sense, general relativity is an example for a classical theory.
charge
A measure of the strength of a force (action-at-a-distance) originating from a body, and of how susceptible it is to being influenced by other bodies via the same force. The most famous example is electric charge: Electrically charged bodies act on other electrically charged bodies via an electric force whose strength is proportional to the electric charges of the bodies involved. It is a characteristic property of charges that they are conserved; they can neither be created from nothing nor simply disappear. For instance, when a positron with electric charge +1 (in suitable units) and an electron with electric charge -1 annihilate to give electromagnetic radiation, overall charge conservation is satisfied: Before the annihilation, the sum of the electric charges was 1+(-1)=0, and afterwards, when there is only uncharged electromagnetic radiation left, it is also zero. In the context of particle physics, there are more abstract charges not directly connected with forces and interaction, but subject to similar conservation laws.
anti-particle
As a general rule, theories uniting special relativity and quantum theory predict the existence of a species of anti-particle for every species of particle. For instance, if such a theory contains electrons, then it also contains their anti-particles, called positrons, for protons, there are anti-protons, and so on. It is a universal feature of anti-particles that they have the same mass as corresponding particles, and equal, but opposite charges; for examples, electrons and positrons have the same mass, but the electrons carry negative electric charge, whereas positrons carry the exact same amount of positive electric charge. For particles that carry no charges of any kind, particles and anti-particles are identical.