An article by Marco Cavaglià

One peculiar feature of string theory, one of the candidates for a theory of quantum gravity, is the presence of extra dimensions of space. Typically, string theory models, or models inspired by the theory, include some way of explaining why we do not notice those extra dimensions in everyday life – they are either “rolled up” (see the spotlight text Extra dimensions – and how to hide them), or our world occupies only a small part of the higher-dimensional universe (see the spotlight text The embedded universe).

However, for most realistic models with extra dimensions, the length scales at which this stronger-than-usual gravity becomes important are very small – far smaller than the size of an atom, or even an atomic nucleus! The proper tools to probe such small distance scales are the most powerful “microscopes” that experimental physics has to offer: particle accelerators!

In particle accelerators, physicists routinely accelerate elementary particles and bring them to collision. The particle energy is a direct measure of the length scales being probed – roughly, the higher the energy, the closer the colliding particles approach each other as they interact. If the length scales reached are those where gravity becomes significantly stronger through the presence of extra dimensions, then the result of such particle collisions, which are monitored using sophisticated detectors, should be influenced by gravitational effects.

For some of the models with extra dimensions, this critical threshold would be reached by particle accelerators of the next generation, namely with the Large Hadron Collider (LHC) that is currently under construction at the European particle physics laboratory CERN near Geneva. This illustration shows a view of the tunnel in which the LHC is currently being installed. The blue tubes are the covers of the magnets which keep the particles on track: 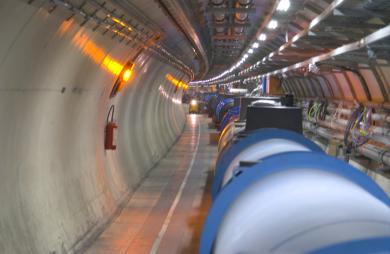 The most striking gravitational events that could be observed in particle colliders would be the formation of minuscule black holes.

According to general relativity, a black hole should form whenever some mass is squeezed into a very small region of space. The precise meaning of “very small” is defined by a length scale called the Schwarzschild radius. This radius depends on the mass, but also on the properties of whatever hidden extra dimensions there might be. For certain kinds of extra dimensions, the Schwarzschild radius of a given mass will be significantly larger than otherwise. Consequently, in order to form a black hole, you wouldn’t need to compress matter nearly as much as in a space without extra dimensions. Under those favourable conditions, collisions of protons with other protons at the LHC should result in the formation of miniature black holes.

More concretely: Protons consist of subcomponents called quarks. When two quarks in collision do not just fly past each other, but collide nearly head-on, then, at the energies achievable with the LHC, a sufficiently high concentration of mass would result, and a mini-black hole would form. In the following animation, the relevant portion of our three-dimensional world is represented by a plane, embedded in a higher-dimensional (in the image: three-dimensional) space. Ordinary elementary particles are confined to the world-plane – they cannot ever move out into the extra dimensions. When the two particles moving in that plane have almost reached each other, a black hole forms, its horizon represented by the black sphere:

Black holes with a mass that is extremely small are extremely unstable. The intensity of Hawking radiation, a hypothetical quantum process by which black holes emit elementary particles, depends on the black hole’s mass – the smaller the mass of a black hole, the greater the amount of energy emitted in this way. By this process, the mini-black holes formed in particle accelerators would evaporate nearly as soon as they are created – typically, such black holes would only exist for a few tenth of a trillionth of a trillionth (10-25, in exponential notation) seconds. Their decay would result in a sudden blast of a few energetic particles. Possibly, some exotic remnant object might survive as well (however, what such an object could be, and whether or not there really are exotic remnants, is not at all clear to present physics):

With respect to the numbers, types and energies of the resulting particles a decaying black hole would look different from other particle collisions. Some of its characteristics are directly related to the existence of the extra dimensions: For instance, in the animation above, you can see that some energy associated with gravity (shown as yellow, wiggly arrows) is carried off into the extra dimensions – from the point of view of a physicist in our three-dimensional universe, this energy would simply vanish!

When physicists study collisions in particle accelerators, they use sensitive detectors to keep track of the different types of resulting particles and their energies, which enables painstaking reconstructions of each collision. The following image, based on a simulation, shows what physicists might see in their detector when a mini-black hole decays:

The image shows a sideways cut-away view of the particle detector CMS currently under construction at the LHC accelerator. The colliding particles move at right angles to the image, either directly towards the observer or directly away. The lines represent traces of particles produced by the black hole decay. The violet line is the trace of an electron, while the red lines are traces of particles called muons, which are similar to electrons but more massive. The blue and cyan lines denote particles consisting of quarks, and are thus distant kin to protons and neutrons – so-called Kaons in blue, pions in cyan.

The detector contains a powerful magnet which produces a strong magnetic field. This field deflects all moving particles which carry electric charge – in the illustration, their traces are curved. The degree of curvature, combined with other data, is used to infer each particle’s momentum and mass.

By studying collision products, physicists at LHC would be able to identify and study the decay of mini-black holes. In this way, they might be able to prove the existence of extra dimensions, and even gain some insight into their properties.

How often would black holes be produced? The answer depends on what model of the extra dimensions one uses for the calculation. According to some models, black holes should be produced at the LHC at a rate of one per second!

If particle collisions at high-energy may indeed create black holes, we should also expect creation of other gravitational objects which are predicted by string theory, such as higher-dimensional spatially extended solutions of the gravitational equations called branes – cousins of the three-dimensional extended subdomain that is our world.

Artificial mini-black holes – should we worry?

Do we need to worry? Might these mini black holes start growing and, eventually, devour the whole earth? We should not worry about this. Even if you do not trust the calculations predicting a quick demise for such minuscule black holes, there is solid data to go by.

If black holes really form in high-energy particle collisions, they are also continuously created in the earth’s atmosphere by the collision of Ultra High-Energy Cosmic Rays (UHECRs) with nuclei of oxygen, carbon, nitrogen and other elements present in the atmosphere.

UHECRs are particles of unknown origin and identity (protons? light atomic nuclei?) reaching the earth from outer space. In such collisions with atmospheric nuclei, a shower of new particles is produced (consisting mostly of electrons, their slightly more massive cousins called muons, and photons). These particles can be detected by specialized observatories on earth or in space, as sketched in the following illustration:

The collision energies for UHECRs can be enormous – some observations show energies of hundreds of TeV (hundreds of trillions of electron volts), which is much larger than the collision energies in particle collider experiments. And while the events with very high energy are exceedingly rare, this type of collision has been going on for literally billions of years, so an inordinate number of mini black holes would have formed. Since the earth has not (yet!) disappeared into one of these black holes, the much less massive man-made mini black holes should be quite safe.

The rarity of ultra-high energy collisions is also one of the reasons that physicists have not been able to confirm or disprove the formation of mini-black holes in this way. Still, this could change over the next few years, as the Pierre Auger Cosmic Ray Observatory in Argentina, which has just started taking data, becomes fully operational.

So will we actually find these tiny black holes? Hard to tell – at the moment, we have no direct evidence that the models predicting the existence of extra dimensions are on the right track, and if they are, that among all the many possible shapes and sizes for the extra dimensions, those realized in our universe allow the production of miniature black holes at a detectable rate. Our search is akin to playing the lottery – we will need to get very, very lucky to find what we seek, but if we did, the payoff would be enormous: We would have the first direct evidence that space has extra dimensions!

The relativistic background of this spotlight topic is explained in Elementary Einstein, in particular in the chapter Relativity and the quantum.

is a professor of physics at the Missouri University of Science & Technology. His research interests are quantum gravity and cosmology.

The Schwarzschild radius is defined indirectly by the formula

atom
All matter we encounter in everyday life consists of smallest units called atoms - the air we breath consists of a wildly careening crowd of little groups of atoms, my computer's keyboard of a tangle of atom chains, the metal surface it rests on is a crystal lattice of atoms. All the variety of matter consists of less than hundred species of atoms (in other words: less than a hundred different chemical elements). Every atom consists of an nucleus surrounded by a cloud of electrons. Nearly all of the atom's mass is concentrated in its nucleus, while the structure of the electron cloud determines how the atom can bind to other atoms (in other words: its chemical properties). Every chemical element can be defined via a characteristic number of protons in its nucleus. Atoms that have lost some of their usual number of electrons are called ions. Atoms are extremely small (typical diametres are in the region of tenths of a billionth of a metre = 10-10 metres), and to describe their properties and behaviour, one has to resort to quantum theory.