General relativity / Elementary Tour part 4: The light side of gravity

For the propagation of light, Einstein’s theory makes a clear prediction: Light is deflected by gravity. Just as test particles move on the straightest-possible lines in curved spacetime (i.e. on spacetime geodesics), so does light.

The most basic example: Light rays passing a massive body are bent towards that mass. This effect increases for light rays that pass the body at smaller and smaller distances from it. The effect is shown in the following figure, with the massive body shown in yellow, and the light rays (with light moving from left to right) in red:

light deflection in the gravitational field of the sun

The first measurement of this relativistic effect was made by British astronomers in 1919. They used the fact that light deflection changes astronomical observations. The “location of a star in the night sky” is simply short-hand for “the direction from which that star’s light reaches us”. Starlight that passes close to the sun before reaching us gets deflected, as sketched in the figure above (but by a much smaller amount than is shown there). This starlight will thus reach us from a slightly different direction than when the sun is in some different region of the sky. Accordingly, the star’s position in the night sky is shifted slightly.

Under ordinary circumstances, the disk of the sun is much too bright for astronomers to observe nearby stars. But during a solar eclipse, such observations are possible, and that’s what two British expeditions did in 1919: They traveled to locations from which they could observe a solar eclipse, photographed the stars near the sun, and compared these images with photographs taken of that same region of the sky while the sun was somewhere else. The comparison confirmed Einstein’s predictions (although, in these early measurements, not to any great precision). In the wake of those observations, general relativity became a theory to be reckoned with (and Einstein became the celebrity he still is today).

An important application of the deflection effect concerns so-called gravitational lenses, masses configured in a way that astronomers can see two or more images of one and the same far-away object in the night-sky! The following photograph shows a famous example. No, those aren’t four objects forming a cross around the center – they’re four images of one and the same object: 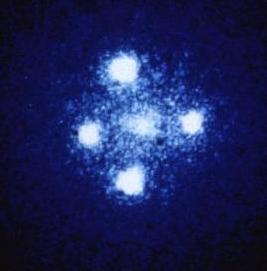 gravity (gravitation)
In classical physics: An action-at-a-distance force by which all bodies that possess mass attract each other (see Newtonian theory of gravity), synonym: gravitational force. In Einstein's general theory of relativity: The fact that matter that possesses mass, energy, pressure or similar properties distorts spacetime, and that this distortion in turn influences whatever matter might be present. An introduction to the basic ideas of general relativity is provided by the section General relativity of Elementary Einstein. More information about the nature of gravity in general relativity can be found in the spotlight text Gravity: From weightlessness to curvature.
general relativity (general theory of relativity)
Albert Einstein's theory of gravity; a generalization of his special theory of relativity. For information about the concepts and applications of this theory, we recommend the chapter general relativity of our introductory section Elementary Einstein. Further information about many different aspects of general relativity and its applications can be found in our section Spotlights on relativity.
field
A field describes how a physical quantity is distributed in space and time. For instance, the area where electric forces act on a test particle is subject to an electric field. Or the gravitational forces which act on the mass of a test body define a gravitational field. In general a field contains energy, occupies space and can change over time.
ESA (European Space Agency)
The European Space Agency coordinates the space-faring activities of the European countries. It is a partner in projects such as the Hubble space telescope and the gravitational wave detector LISA. ESA website