An article by Peter Aufmuth

A gravitational wave passing through a solid body, say, through a solid metal cylinder, acts on that body’s atoms as a kind of time-dependent tidal force. This force rhythmically squeezes the body in one direction while stretching it in an orthogonal direction (compare the deformations of the mandala on the page The rhythm of geometry in the chapter Gravitational waves of Elementary Einstein). These rhythmic squeezes and stretches can induce harmonic oscillations of the body in question – especially if that body is predisposed to the particular type of oscillation that gravitational waves are wont to excite (i.e if the body “resonates”).

One possible method for detecting gravitational waves is to detect the ways they influence a solid body’s oscillation. The corresponding detectors are called resonant detectors. They are sensitive to signals with frequencies that are close to the natural oscillating frequency of the detector body, the resonator. This natural frequency basically depends on its mass.

The first gravitational wave detectors were of this type. They were constructed by the US physicist Joseph Weber (1919 – 2000) in the 1960s at the University of Maryland. Weber’s resonant antennas were aluminum cylinders with a mass of 1.5 tons. Suitable gravitational waves would excite the so-called “fundamental longitudinal mode” of the cylinder, whose natural frequency (“eigen frequency”) was around 1600 Hertz. This oscillation deforms the cylinder in the way shown in the following animation (where the extent of the deformation has been greatly exaggerated for clarity):

In a frequency range around 1000 Hertz, astrophysicists mainly expect very short pulses of gravitational waves from supernovae – gigantic explosions of massive stars. Such gravitational wave pulses strike a resonant detector like a clapper strikes a bell, and just like a bell, the detector continues to resonate for a bit – this is what makes detection possible. In Weber’s original setup, the cylinder’s deformations were meant to be detected with the help of so-called piezoelectric crystals bonded to the surface of the cylinder: when they are deformed, such crystals produce electrical voltages that can be read out.

However, Weber’s cylindrical antennas were not nearly sensitive enough to have a chance of detecting gravitational waves. For them, the noise was much too great – for instance, the continual tiny oscillations of the antenna atoms (their thermal motion, used to define the antenna’s temperature) already excites the longitudinal oscillation a hundred times stronger than any gravitational wave would. For this reason, the successor models to Weber’s cylinders, the modern resonant detectors, are cooled down to work at temperatures near absolute zero. The following image shows one of these modern detectors, the NAUTILUS detector in Frascati (Italy), opened for inspection. In the centre, one can see the cylindrical test mass; most of the layers surrounding it serve as thermal insulation: 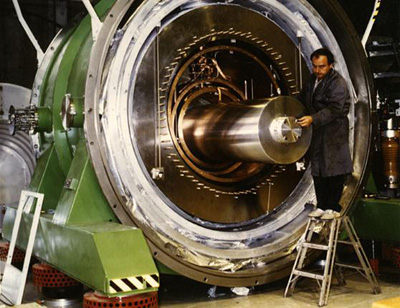 Another problem is the noise of the electrical transducers and amplifiers used to process the gravitational wave signal. For this reason, modern detectors do not use piezo crystals; instead, they use cavity resonators or coils whose electric properties are changed by the deformation of the test mass. To amplify the signal with as little noise as possible, they use so-called SQUIDs, “superconducting quantum interference devices” in which quantum effects are used for amplification. In addition, it is important to suspend the whole test mass as a pendulum, in order to isolate it as well as possible from seismic and other external disturbances. With the help of all these tricks, modern resonant detectors indeed reach the sensitivity needed to detect gravitational waves, as they are able to detect deformations of 10-19 metres.

A brief survey of modern resonant antennas can be found at the end of the spotlight topic Listening posts around the globe. Almost all of them use cylindrical test masses; however, recently a spherical resonator has begun measurements, the Dutch detector MiniGRAIL. In contrast with cylinders, spherical antenna are equally sensitive to all gravitational waves, regardless of the direction they come from. In addition, they can simultaneously measure the wave’s influence on more than one mode of oscillation, which allows the researchers to determine the position of the gravitational wave source in the sky.

works as a scientist at the Albert Einstein Institute in Hannover and the University of Hannover, where he is involved in the maintenance and development of the gravitational wave detector GEO600.

Big Bang Nucleosynthesis: Cooking up the first light elements
The definition of “now”

surface
Geometric space with two dimensions. Examples include the plane or the surface of a sphere.
stars (star)
A cosmic gas ball that is massive enough for pressure and temperatur in its core to reach values where self-sustained nuclear fusion reactions set in. The energy set free in these reactions makes stars into very bright sources of light and other forms of electromagnetic radiation. Once the nuclear fuel is exhausted, the star becomes a white dwarf, a neutron star or a black hole.
solid body (solid state)

State of matter in which the atoms or molecules are bound so tightly to each other so that they form a solid, stable lump. In contrast with fluids, whose form adapts to whatever container they are placed in, solid bodies keep their form.

Compare the other states of matter: liquid, gas, plasma.

Detector for gravitational waves in which it is attempted to measure the influence of these waves on an oscillating test mass.

More information about how such detectors work can be found in the spotlight topic Small vibrations.

quantum effects
All effects and phenomena that follow from the fact that, deep down, our world obeys not the laws of classical physics, but those of quantum theory. Examples are tunneling and consequences of the Pauli exclusion principle for the structure of atoms.
mass
In classical physics, mass plays a triple role. First of all, it is a measure for how easy it is to influence the motion of a body. Imagine that you're drifting in emtpy space. Drifting by are an elephant and a mouse, and you give each of them a push of equal strength. The fact that the mouse abruptly changes its path, while the elephant's course is as good as unaltered, is a sure sign that the mass (or, in the language of physics, the inertia or inertial mass) of the elephant is much greater than that of the mouse. Secondly, mass is a measure of how many atoms there are in a body, and of what type they are. All atoms of one and the same type have the same mass, and adding up all those tiny component masses, the total mass of the body results. Thirdly, in Newton's theory of gravity, mass determines how strongly a body attracts other bodies via the gravitational force, and how strongly these bodies attract it (in this sense, mass is the charge associated with the gravitational force). In special relativity, one can also define a mass that is a measure for a bodies resistance to changing its motion. However, the value of this relativistic mass depends on the relative motion of the body and the observer. The relativistic mass is the "m" in Einstein's famous E=mc2 (cf. equivalence of mass and energy). The relativistic mass has a minimum for an observer that is at rest relative to the body in question. This value is the so-called rest mass of the body, and when particle physicists talk of mass, this is usually what they mean. Just as in classical physics, the rest mass is a kind of measure for how much matter the body is made up of - with one caveat: For composite bodies, the energies associated with the forces holding the body together contribute to the total mass, as well (another consequence of the equivalence of mass and energy). In general relativity, mass still plays a role as a source of gravity; however, it has been joined by physical quantities such as energy, momentum and pressure.
interference

Interference can happen among electromagnetic waves (such as light), but also among water waves and among sound waves.