Gravitational waves carry not only energy, but also information about how they were produced. For instance, the short burst produced in a supernova explosion differs greatly from the wave pulse produced during the merger of two black holes. Gravitational waves are, however, fundamentally different from that other cosmic messenger astronomers have come to rely on: electromagnetic radiation (light, radio waves, X-rays…).

Every single atom can radiate and absorb electromagnetic waves. The light reaching us from astronomical sources is a hodgepodge of little snippets of radiation, each snippet produced by one of the object’s myriads of atoms. That’s good news and bad news. The good news is that we can trace radiation snippets back to where they came from, and thus reconstruct a detailed picture of the object’s structure. The bad news: electromagnetic radiation is as easily absorbed as it is produced. If there’s enough matter between us and an astronomical object, it will absorb and scatter light so badly that we might see a very blurry picture, or no picture at all. Electromagnetic information is, in that sense, superficial. We cannot see the interior of the sun or a supernova, merely its outer layers.

Gravitational waves are different. First of all, what they convey is less a picture than a sound, not so much a collection of lots of different contributions, but a harmonic composite wave. In that way, they are similar to a sound waveform that reaches us from an instrument: such a waveform is a harmonic whole, while light would show us all kinds of details about different regions of the instruments (“how the instrument looks”). Just as a sound wave contains information about how the instrument vibrates, the gravitational waves carry information about the events at which they were formed. Most importantly: Almost all astronomical bodies are transparent to gravitational waves. The waves thus carry information that we could not obtain by other means – information about the flow of matter in the heart of a supernova, or about the material properties of merging neutron stars. They promise data about regions that would otherwise be hidden, or accessible only indirectly through computer simulations. One such simulation is shown below: the density distribution in the center of a supernova, one second after the beginning of the explosion. Brighter regions correspond to higher density: 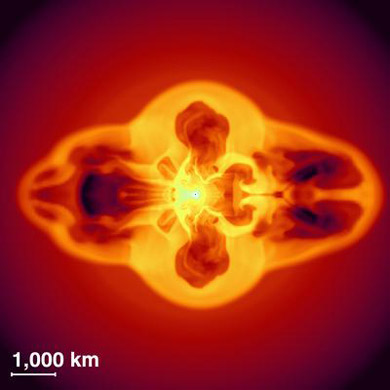 However, even gravitational waves produced in the most violent commotions in our cosmic neighbourhood are very weak indeed, once they’ve reached earth. True, a supernova explosion in a nearby galaxy will produce, within the first few seconds, the energy of a trillion sextillion nuclear explosions, with much of that energy radiated away in the form of gravitational waves – but on its way to earth, all that energy dilutes to a pitiful remnant wave, changing the distance between the earth and the sun by the diameter of a hydrogen atom, at best. This makes the detection of gravitational waves a supremely difficult technical endeavor.

supernova
Highly energetic explosion that ends the life of stars with more than about ten solar masses. In this explosion, the outer layers of the stars are ejected into space, while the core regions collapse to form a neutron star or even a black hole.
sun
The central (and most massive) body of our solar system; the star closest to us; a ball of gas with a radius of ca. 700000 km (for comparison the radius of the earth: 12756 km) and a mass of 1.989·1030 kilograms [see exponential notation]. In the interior of the sun, nuclear fusion processes run their course; they are responsible for the sun's impressive brightness.
stars (star)
A cosmic gas ball that is massive enough for pressure and temperatur in its core to reach values where self-sustained nuclear fusion reactions set in. The energy set free in these reactions makes stars into very bright sources of light and other forms of electromagnetic radiation. Once the nuclear fuel is exhausted, the star becomes a white dwarf, a neutron star or a black hole.
second
In the International System of units: the basic unit of time. Defined as a certain multiple of the oscillation period of electromagnetic radiation set free in a certain transition within the electron shell of atoms of the type Cesium-133.
radiation

neutron
Particle that is electrically neutral and comparatively massive; the atomic nuclei consist of neutrons and protons. Neutrons are not elementary particles, they are compound particles consisting of quarks that are bound together through the strong nuclear interaction . Collectively, neutrons, protons and a number of similar particles are called baryons. Neutron stars are mainly made of neutrons.
matter
In general relativity: All contents of spacetime that contribute to its curvature: particles, dust, gases, fluids, electromagnetic and other fields. In particle physics: All elementary particles with half-integer spin, such as electrons and quarks, as well as their composites such as protons and neutrons, in contrast with force particles.
light
Light in the strict sense of the word is electromagnetic radiation the human eye can detect, with wave-lengths between 400 and 700 nanometres. In relativity theory and in astronomy, the word is often used in a more general sense, encompassing all kinds of electromagnetic radiation. For instance, astronomers might talk about "infrared light" or "gamma light"; in this context, light in the stricter sense is referred to as "visible light". Within classical physics, the properties of light are governed by Maxwell's equations; in quantum physics, it turns out that light is a stream of energy packets called light quanta or photons. In the context of relativistic physics, light is of great interest, and for a number of reasons. First of all, the speed of light plays a central role in both special and general relativity. Also, there are a number of interesting effects in general relativity which are associated with the propagation of light, namely deflection, the Shapiro effect and the gravitational redshift.
hydrogen
The lightest (and, in our universe, the most abundant) chemical element. The atomic nucleus of an ordinary hydrogen atom is a single proton. If the atomic nucleus contains an additional neutron, the atom is called heavy hydrogen or deuterium.
gravitational waves
Distortions of space geometry that propagate through space with the speed of light, analogous to ripples on the surface of a pond propagating as water waves. For more informations about gravitational waves, please consult the chapter Gravitational waves of Elementary Einstein. Selected aspects of gravitational wave physics are described in the category Gravitational waves of our Spotlights on relativity.
gravitational wave astronomy
Discipline of astronomy which aims at using gravitational waves to gain information about cosmic objects or the cosmos as a whole – for instance about what's happening in the core region of a supernova, about neutron star or about the heated past of our universe. Since 2015, scientists have been detecting gravitational waves using highly sophisticated gravitational wave detectors, so that the time of gravitational astronomy has now begun for real.
galaxy
Stars are rarely found alone - usually, they congregate in conglomerates of millions, billions or even more stars called galaxies. A case in point is our sun, part of a galaxy we call the milky way. The life of a young galaxy can be very turbulent. Examples of such young, active galactic nuclei are radio galaxies and quasars.
energy
Physical quantity with the special property that, in physical processes, energy is neither destroyed nor created, simply transformed from one form of energy to another. Some of the different forms of energy that are defined separately are kinetic energy, thermal energy and the energy carried by electromagnetic radiation. Processes that transform one form of energy into another take place in all machines we use in everyday life, from the engine of a subway train (electrical energy into kinetic energy of the train) to an electric blanket (electrical energy into thermal energy). One important consequence of special relativity is that energy and mass are completely equivalent - two different ways to define what is, on closer inspection, one and the same physical quantity. See the keyword equivalence between mass and energy.
electromagnetic radiation
Electromagnetic influences (in the language of physics: electric and magnetic field) which, even with no electric charges present, are locked in a state of mutual excitation so that they form a wave that propagates through space. As this wave transports energy, it is, by the usual physics definition, a form of radiation, called electromagnetic radiation. Depending on frequency, there are special names for different types of electromagnetic radiation; going from lower to higher frequencies: radio waves, microwaves, infrared radiation, visible light, ultraviolet radiation, X-rays and gamma rays. In the context of quantum theory, it turns out that electromagnetic radiation consists of tiny energy packets, called light particles or photons.
density
In a stricter sense synonymous with "mass density": The average density of matter in a region of space is the total mass of all matter contained in that region, divided by the region's volume. More generally, density can refer to other physical quantities as well. The energy density, for instance, is the total sum of energy localized in a region divided by that region's volume.
atom
All matter we encounter in everyday life consists of smallest units called atoms - the air we breath consists of a wildly careening crowd of little groups of atoms, my computer's keyboard of a tangle of atom chains, the metal surface it rests on is a crystal lattice of atoms. All the variety of matter consists of less than hundred species of atoms (in other words: less than a hundred different chemical elements). Every atom consists of an nucleus surrounded by a cloud of electrons. Nearly all of the atom's mass is concentrated in its nucleus, while the structure of the electron cloud determines how the atom can bind to other atoms (in other words: its chemical properties). Every chemical element can be defined via a characteristic number of protons in its nucleus. Atoms that have lost some of their usual number of electrons are called ions. Atoms are extremely small (typical diametres are in the region of tenths of a billionth of a metre = 10-10 metres), and to describe their properties and behaviour, one has to resort to quantum theory.