Cosmic expansion has consequences for the light that reaches us from far-away galaxies – consequences that, in the 1920s, set astronomers on the track of an expanding universe in the first place.

For an exact description of these effects, one would need a geometrical picture of the universe’s expansion. This is the proper way to do things in general relativity, in any case. However, for galaxies not too far away, one can find an approximate explanation that views expansion not as a geometric effect, but as ordinary motion of the galaxies in question. We’ve already used this approximation on the previous page to “derive” the Hubble relation.

For galaxies literally moving away, we can bring into play what’s called the Doppler effect. Many readers will know this effect from everyday life. Imagine you’re standing on the sidewalk, and there’s a fire truck racing towards you on the street, lights flashing, horns blaring. The moment it passes you before rushing on to wherever its going, you can hear the pitch of its horn change quite suddenly. Whatever sounds the receeding fire truck is making, they sound much deeper to your ear than when it was approaching. For light from moving objects, there is an exactly effect – a frequency shift towards higher frequencies (corresponding to a higher pitch, for sound-waves) if the light-source moves towards us, and to lower frequencies (lower pitch) if it moves away from us. For light, the shift towards higher frequencies is a shift towards the blue end of the spectrum, while a shift towards lower frequencies is a shift towards the red end, called a red-shift.

With galaxies moving away from us systematically due to cosmic expansion, this would lead us to expect that astronomers should observe the light of these galaxies to be red-shifted – and as the speed with which a galaxy recedes increases with distance, this red-shift should increase as we look at more and more distant galaxies. This is indeed the case. 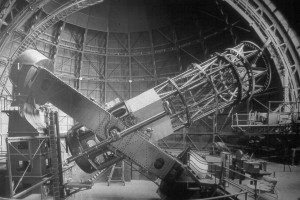 With this telescope, Edwin Hubble discovered the systematic correlation between the distances and red-shifts of far-away galaxies which led physicists to conclude that our universe is expanding.

For galaxies that are extremely far away, the simple Doppler shift model is inappropriate. For them, it’s important that the cosmological red-shift is not so much a Doppler shift but the fact that cosmic expansion stretches all light-waves that make their way to us from distant light sources. This stretching also corresponds to a red-shift, and there is still a relationship between red-shift and distance, but it is somewhat more complicated than in the Doppler shift model. The details, it turns out, depend on certain parameters of the cosmological model, such as the average density of the whole universe, and that’s quite exciting: by measuring red-shifts and distances, we can measure parameters that describe our cosmos as a whole! Once the parameters are fixed by these and other measurements, one can make further predictions – for instance: how many galaxies can one expect to find at a certain distance from our own? These predictions allow tests of the cosmological models, and so far, Einstein-based cosmology has passed all these tests.

The most precise tests (and the most precise ways to fix parameters) emerge from the models’ predictions for our universe’s fiery past – more about that on the next page: The early universe.

speed
An object's average speed is the distance it moves during a given period of time, divided by the length of the time interval. If you make the time interval infinitely small, the result is the object's speed at one particular moment in time. The notion of speed can be applied to waves in different ways; for instance, for a simple wave, the phase speed is the speed at which any given wave crest or wave propagates through space. See also the more general entry velocity.
spectrum
The electromagnetic radiation reaching us from an astronomical object or other source is a mix of electromagnetic waves with a great variety of frequencies. The spectrum lists the composition of this mix: For every frequency, it states the amount of radiation energy contributed by waves of that particular frequency.
light
Light in the strict sense of the word is electromagnetic radiation the human eye can detect, with wave-lengths between 400 and 700 nanometres. In relativity theory and in astronomy, the word is often used in a more general sense, encompassing all kinds of electromagnetic radiation. For instance, astronomers might talk about "infrared light" or "gamma light"; in this context, light in the stricter sense is referred to as "visible light". Within classical physics, the properties of light are governed by Maxwell's equations; in quantum physics, it turns out that light is a stream of energy packets called light quanta or photons. In the context of relativistic physics, light is of great interest, and for a number of reasons. First of all, the speed of light plays a central role in both special and general relativity. Also, there are a number of interesting effects in general relativity which are associated with the propagation of light, namely deflection, the Shapiro effect and the gravitational redshift.
lead
Chemical element with the symbol Pb; each lead nucleus contains 82 protons. Lead nuclei, stripped of their electrons, are among the types of heavy ions which are brought into collision in particle accelerators such as the Relativistic Heavy Ion Collider in order to recreate the state of matter in the early universe shortly after the big bang.
Hubble relation

general relativity (general theory of relativity)
Albert Einstein's theory of gravity; a generalization of his special theory of relativity. For information about the concepts and applications of this theory, we recommend the chapter general relativity of our introductory section Elementary Einstein. Further information about many different aspects of general relativity and its applications can be found in our section Spotlights on relativity.
galaxy
Stars are rarely found alone - usually, they congregate in conglomerates of millions, billions or even more stars called galaxies. A case in point is our sun, part of a galaxy we call the milky way. The life of a young galaxy can be very turbulent. Examples of such young, active galactic nuclei are radio galaxies and quasars.
frequency