An article by Tim Dietrich

More than 100 years after Albert Einstein’s formulation of the general theory of relativity and more than 30 years after the first discovery of a binary neutron star system, gravitational waves of colliding neutron stars have been detected for the first time. The measurement of the emitted gravitational waves and their electromagnetic fingerprint represents a breakthrough in the field of multi-messenger astronomy.

The first direct detection of gravitational waves in September 2015, emitted by two merging black holes, is a milestone in modern physics that was rewarded with the Nobel Prize 2017.

Gravitational waves are tiny spacetime ripples that occur when large masses accelerate. In 1916 Albert Einstein predicted the existence of such waves, but concluded that they were too weak to be measured. With ever more sophisticated experimental methods and measurement techniques and immense advances in computer simulation and data analysis, a hundred years later the era of gravitational wave astronomy began with the first measured gravitational wave signal.

Since gravitational waves always occur when masses move at an accelerated rate, not only black holes but also other massive celestial bodies emit gravitational waves. One example are neutron stars. They have a diameter of 20 to 30 kilometres and sometimes contain more than twice as much mass as our Sun.

The first indirect detection of gravitational waves from neutron stars was achieved by the US astrophysicists Russell A. Hulse and Joseph H. Taylor in 1974. For this discovery they won the Nobel Prize in Physics almost 20 years later. It was not until 17 August 2017 that gravitational wave detectors on Earth were able to capture the direct signal of two neutron stars orbiting each other and finally colliding. It was given the designation GW170817.

The animation shows the gravitational wave signal with colors from yellow to red with increasing strength, the density of the neutron stars from light to dark blue with densities in the range of 200,000 to 600,000 tons per cubic centimetre. In addition, the matter ejected from the system is shown in violet. This ejected material is the source of the kilonova discovered after the fusion of the neutron stars. Since the density of this released ejected material is smaller than inside the neutron star, we also show material with a density of only 600 tons per cubic centimetre. Finally, the black hole that forms after the collapse of the superheavy neutron star is shown in grey.
Video: Numerical simulation: T. Dietrich (Max Planck Institute for Gravitational Physics) and the BAM collaboration; visualization: T. Dietrich, S. Ossokine, H. Pfeiffer, A. Buonanno (Max Planck Institute for Gravitational Physics)

The two LIGO detectors in the USA observed GW170817 for about 100 seconds. But a loud interfering signal superimposed the measurement in one of the devices and thus obstructed the data analysis. Employees of the Max Planck Institute for Gravitational Physics were able to remove this interference from the signal and thus localize the position of origin. Since, in addition to the LIGO detectors, the European Virgo detector was also in operation, the sky position was determined so precisely that astronomers identified the original galaxy for the event within 12 hours of its discovery. 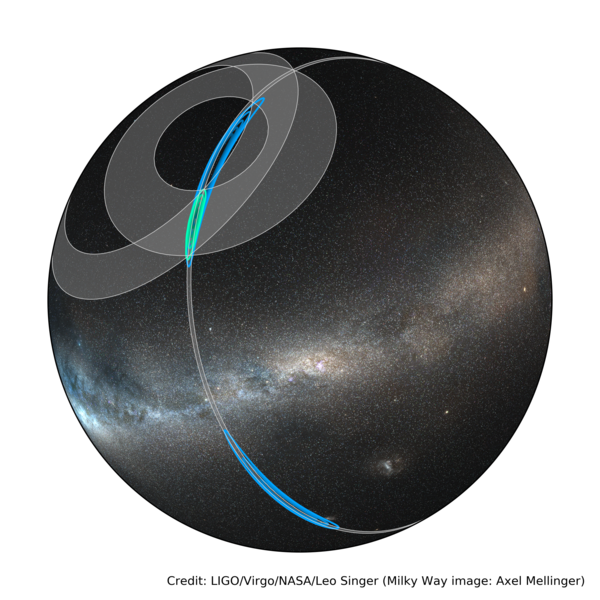 In contrast to the collision of black holes, the collision of two neutron stars also leads to electromagnetic radiation. The very precise localization by LIGO and Virgo made it possible for a handful of observatories around the globe to scan the area of the sky from which the signal came just a few hours after measuring. After all, about 70 astronomical observatories on Earth and in space were involved in follow-up observations and investigated electromagnetic signals of this event. Measurements were made in the optical, infrared, ultraviolet, X-ray, radio and gamma radiation ranges. This made it possible to verify a large number of theoretical models of such events. For example, the identification of GW170817 as a double neutron star system and the observation of a gamma-ray flash only 1.7 seconds after the fusion process confirms the assumption that collisions of neutron stars are responsible for the long known high-energy gamma-ray flashes.

Furthermore, the signals in the optical and infrared spectrum indicate that new heavy elements, including gold and platinum, have formed under the extreme conditions of stellar collisions. This is a big step towards solving the decade-old mystery of the origin of the chemical elements heavier than iron in the universe.

Based on an idea of the emeritus director of the Max Planck Institute for Gravitational Physics, Bernard F. Schutz, GW170817 was also used to determine the expansion velocity of the universe in a new, independent way.

One of the greatest unsolved puzzles in nuclear physics is to describe matter with extremely high densities – greater than the density of an atomic nucleus. So far, it is impossible to produce such densities of matter under normal laboratory conditions. Investigations of neutron stars allow direct conclusions to be drawn about how matter behaves under such extreme conditions.

This requires a detailed investigation of the gravitational wave signal. In order to isolate this signal from the detector noise and to understand the properties of GW170817, complex analytical methods and high-precision waveform models are essential. Staff members of the Department of Astrophysical and Cosmological Relativity Theory of the MPI for Gravitational Physics have contributed significantly to the development and continuous improvement of these analysis algorithms and waveform models. With these methods it was possible to determine the masses and intrinsic rotations of the two neutron stars of event GW170817 and to make statements about the properties of extremely dense matter.

These single images from the numerical-relativistic simulation of two orbiting and fusing neutron stars (GW170817) show the density distribution during the fusion process. Higher densities are shown in red, lower densities in yellow. The result of the collision is a black hole. T. Dietrich, S. Ossokine, H. Pfeiffer, A. Buonanno (Max Planck Institute for Gravitational Physics), BAM Collaboration

The gravitational wave astronomy has passed its test

Astrophysicists are currently experiencing an extremely fruitful and exciting time: Tiny waves of curved spacetime can now be measured. Colliding neutron stars reveal their interior and provide details about the formation of heavier elements in the universe. Not only the measured gravitational wave signal, but also the joint measurement of gravitational waves and electromagnetic radiation represents a breakthrough in the field of multi-messenger astronomy.

This article appeared in a slightly different form for the first time in the research reports of the Max Planck Society in 2017.

Tim Dietrich is a theoretical astrophysicist and professor at the University of Potsdam (Germany).

In physics, velocity is a combination of two aspects: First of all, how fast an object is, in other words: how long a distance it moves in a given time (its "speed"). Secondly, the direction in which an object moves. Physicists combine these two informations into a single mathematical object, called a "vector", and this is what is called the velocity. For instance, when a car goes around a curve with 100 miles per hour, its speed is constant, but as it changes its direction of movement, its velocity changes correspondingly.

relativistic (perihelion advance, relativistic)
For planetary orbits, there is a small difference between the predictions of Newtonian gravity and general relativity. For instance, in Newton's theory, the orbital curve of a lonely planet orbiting a star is an ellipse. In general relativity, it is a kind of rose or rhodonea curve. Such a curve is similar to an ellipse curve, which shifts a bit with each additional orbit. The shift can be defined by looking at the point which is closest to the sun (perihelion) on each orbit. The additional relativistic shift is, hence, called relativistic perihelion shift or relativistic perihelion advance. A picture can be seen on the page A planet goes astray in the chapter General relativity of Elementary Einstein.
nucleus
Extremely dense central region of an atom, consisting of protons and neutrons held together by nuclear forces. The number of protons determines what chemical element a nucleus represents. Typical diameter for atomic nuclei are in the region of a quadrillionth of a metre= 10-15 metres. This makes nuclei about a hundredth of a thousandth as large as atoms.
nuclear physics

That branch of physics dealing with the properties of atomic nucleus. One connection to relativistic physics is the fact that nuclear physics is needed to describe the properties of matter in the early universe of the big bang models and in the interior of neutron stars.

Electromagnetic radiation in the frequency region between a hundred billion and a trillion oscillations per second, corresponding to wave-lengths between 0.8 micrometres and 1 millimetre. The thermal radiation associated with everyday temperatures is infrared radiation.