An article by Magdalena Kersting and Jens Kube

Gravitational wave astronomy is a still young field of research that gives scientists insights into cosmic regions not accessible by conventional telescopes. When massive objects such as black holes or neutron stars merge, they distort the structure of space and time. Gravitational waves are created which propagate through the universe at the speed of light. They allow insight into the development of stars. In addition, the measurements help to validate the general theory of relativity.

Since the first direct detection of gravitational waves in 2015, experts worldwide, including scientists from the Max Planck Institute for Gravitational Physics (Albert Einstein Institute) with its sites in Hanover and Potsdam, have been working together to capture further signals. Not only improved measuring instruments and precise models of astronomical processes, but also modern data processing software contribute to this cooperation. Using sophisticated algorithms, the researchers were even able to detect four more signals of merging black holes.

The shape of the gravitational wave signals that detectors register on Earth contains information about both the physical properties of the merging objects and their position in the sky. However, much knowledge can be gained only by combining information from multiple observations: The gravitational waves observed so far are caused by the collision of black holes (or two neutron stars in one case). The latter type of events have never been observed directly before, only predicted theoretically. With each new detection of a signal, scientists therefore gain valuable insights into the abundance and properties of such merging double systems.

For the systematic classification of these double systems, scientists have compiled a catalogue of measurements from the first two observation runs of the LIGO and Virgo detectors. It includes the mergers of ten pairs of black holes and one pair of neutron stars. For astrophysicists, the mass spectrum of black holes (i.e. how often which masses occur), the merger of neutron stars and signals that are precisely localized in the sky by three detectors are particularly informative. 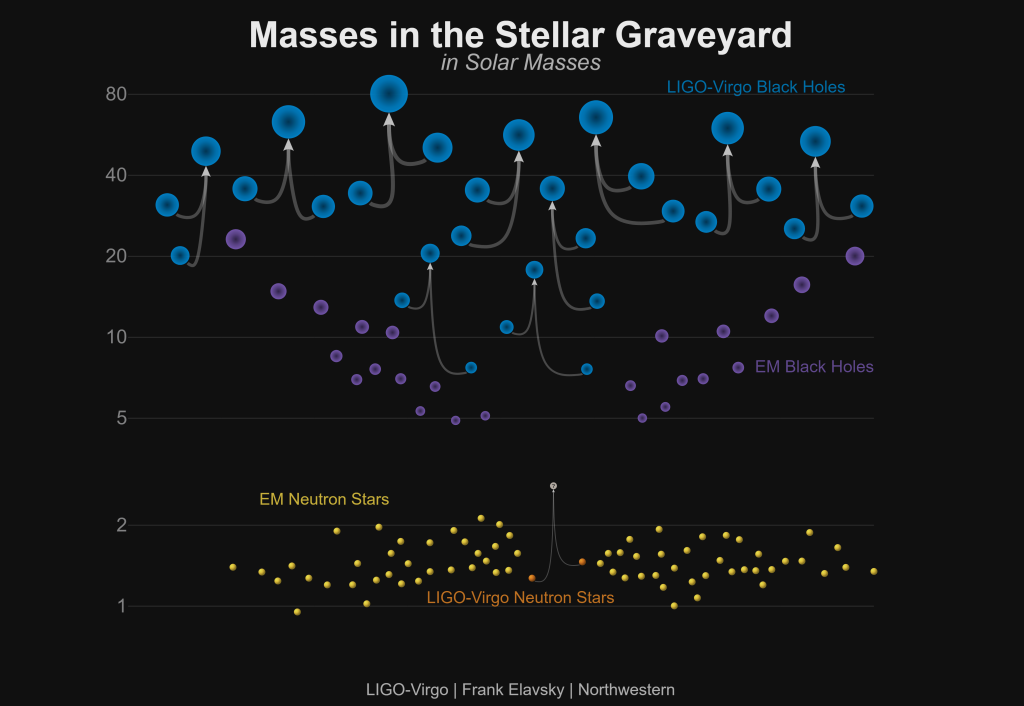 Visualization of the 11 merging objects published in the first gravitational wave catalogue. The position of the circles in the diagram indicates how massive (in solar masses) the objects are. The arrows connect the two initial objects with the result of the merger. The circles without arrows represent the single objects of the same type that have been observed so far (purple: black holes, yellow: neutron stars). Source: LIGO/VIrgo/Northwestern Univ./Frank Elavsky

One highlight from the two test runs is the event GW170729, which was measured during the second observation run and identified later. GW170729 is the most distant gravitational signal detected to date. The gravitational waves travelled about 5 billion years before reaching Earth. The signal is also unique because, with two black holes of 50 and 34 solar masses, it represents the most massive merger ever observed.

Most of the black holes discovered by LIGO and Virgo, with several dozen solar masses, are much more massive than the previously known black holes, which scientists had indirectly detected using electromagnetic signals. The observation of such double systems was therefore initially a big surprise. Binary systems of black holes are often the last step in the development of massive stars. The fact that the black holes involved are heavier than predicted suggests that the original stars formed in an environment that is very different from that of our Solar System. In order to understand exactly how and where pairs of such heavy black holes formed, scientists are eagerly awaiting further observations of such binary systems in the coming years.

The signal GW170817 is placed at the other end of the mass spectrum: It is the so far only detected event of two merging neutron stars. In order to prove the merging of a neutron star pair, scientists need some luck: Since neutron stars are lighter than black holes, weaker gravitational waves are emitted during a collision, which lead to a weaker signal in the data and are therefore more difficult to detect. The two neutron stars of GW170817 collided in a galaxy just 130 million light-years away on our cosmic doorstep and could therefore be registered.

The composition and behaviour of neutron stars are still largely unknown in detail. Measurements on these star remnants therefore promise new insights into the properties of matter under extreme conditions. Last but not least, neutron stars can also be observed with conventional telescopes because, unlike black holes, they also emit electromagnetic waves. The combined measurement of gravitational waves and electromagnetic waves opens up exciting new possibilities in multi-messenger astronomy, in which objects are observed simultaneously by different forms of radiation or other messengers from the universe: in the electromagnetic spectrum from radio waves to gamma rays, with cosmic particles as for example neutrinos (e.g. the supernova SN1987A), and finally since 2015 also with gravitational waves.

One of the great challenges of multi-messenger astronomy is to quickly point telescopes for electromagnetic waves (such as radio telescopes or optical telescopes) at merging binary systems that reveal themselves through gravitational waves. In order to be able to carry out follow-up observations, scientists must localize the sources of the gravitational waves as quickly and accurately as possible. When a gravitational wave reaches Earth, the signal arrives at the various detectors at slightly different times. These time differences allow to deduce the direction from which the signal originated, just as we humans with two ears can deduce the direction of a sound event from the different propagation times of acoustic waves. In the universe, however, it is not enough to have two ears, since these, to put it simply, only allow orientation in a plane and the second dimension – the “height” of a sound – can only indirectly and inaccurately be located. Only with three gravitational wave detectors can the direction in two dimensions be determined well.

The signal GW170814 marks the first event measured by three detectors. As a result of this combination, GW170814 represents the most precisely located merger of black holes in the catalogue: the position could be determined on 39 square degrees (195 times the apparent size of the full moon) in the northern hemisphere. Although this is still a large field, it is manageable for follow-up observations at least in some wavelength ranges. 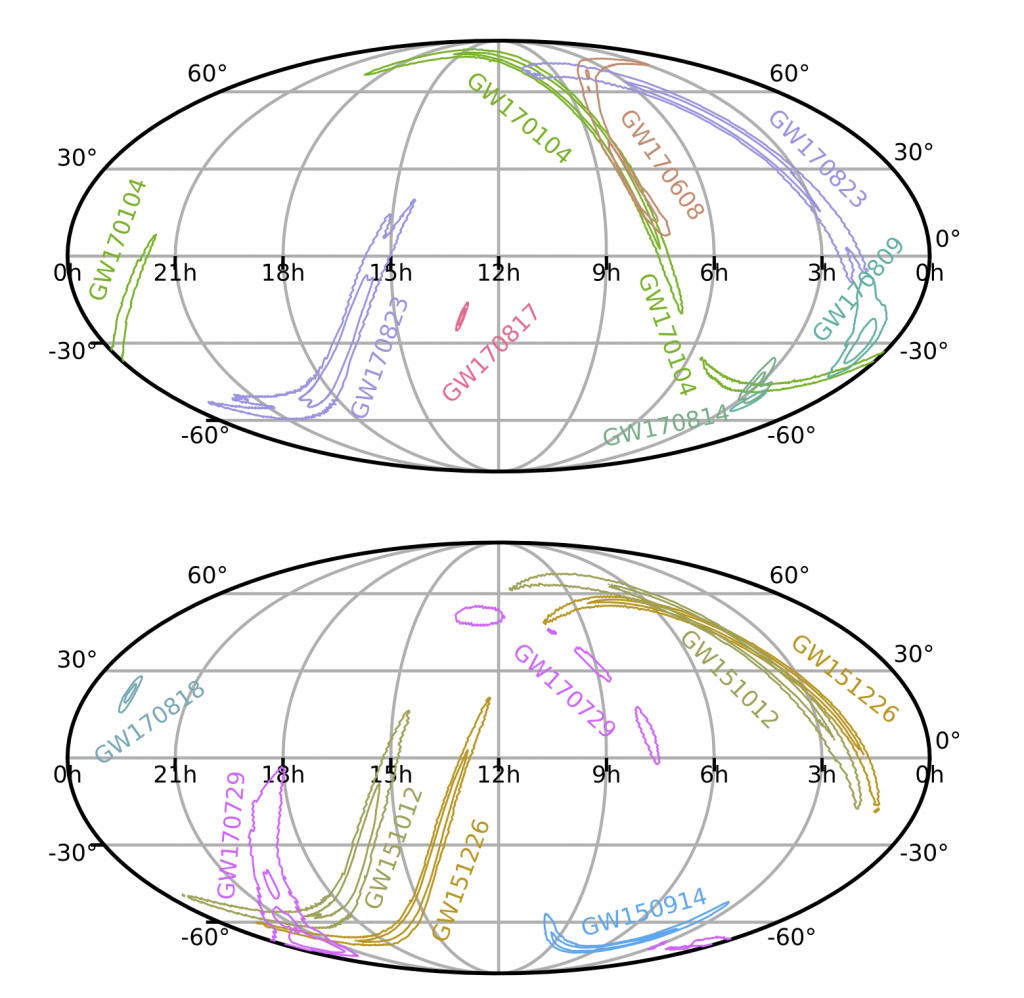 Where do the gravitational waves from the GWTC-1 originate from? The elongated contours indicate from which region the gravitational waves come with a confidence of 50% (inner region) or 90% (outer region). At GW170814, GW170817 and GW170818 these areas are clearly smaller than at the other events: Here the detection was done by the two LIGO detectors and by Virgo. Source: B. P. Abbott et al. (LIGO Scientific Collaboration and Virgo Collaboration) Phys. Rev. X 9, 031040

The publication of the gravitational wave catalogue is an example of the close cooperation between experts worldwide. In order to filter the weak gravitational wave signals out of the noise of the measured data, astronomers, detector physicists and data scientists had to pool their expertise.

In particular, a key technology for which the German gravitational wave detector GEO600 has made pioneering contributions promises new breakthroughs. The process of so-called squeezed light represents a technical innovation to reduce quantum noise. Quantum noise is caused by random fluctuations of photons, which lead to natural uncertainty in measurements. By squeezing light, scientists manipulate the quantum world and shift uncertainties in the measurement process so that the relevant parameters can be measured with greater precision.

Thanks to more sensitive detectors, researchers hope to gain dozens of new observations of gravitational waves from the merger of binaries during the third measurement period launched in spring 2019. In the last few years, gravitational wave astronomy has made tremendous progress. The rate at which new signals will emerge in the LIGO and Virgo data suggests that the most spectacular finds are yet to come.

is a trained astrophysicist and a freelance science communicator. Since 2018, he is the editor for Einstein-online.

Magdalena Kersting is a physics educator and science communicator.

Cite this article as:
Magdalena Kersting and Jens Kube, “The first catalogue of cosmic collisions” in: Einstein Online Band 11 (2019), 11-1001