An article by Peter Aufmuth

The possibility of extremely large structures, and the absence of Earth tremors – seismic vibrations – these are two convincing reasons for sending a gravitational wave detector into space. The concept of such a space-based gravitational wave detector, LISA (Laser Interferometer Space Antenna), has been studied jointly by the European and US space agencies ESA and NASA for 20 years. In 2017, ESA selected LISA as the third major (L3) mission in its Cosmic Vision Plan. LISA will consist of three satellites at a distance of millions of kilometres. These satellites measure their mutual distances with high precision using laser light in order to detect gravitational waves in space. LISA will be complementing ground based gravitational wave detectors by observing spacetime ripples at low frequencies. These are caused, for example, by the fusion of extremely massive black holes and binary star systems. LISA is a space-based interferometric detector whose laser arms will be 2.5 million kilometres long.

For LISA, one “mother” and two “daughter” spacecrafts will be brought into an orbit around the Sun, which is similar to the Earth’s orbit. The satellites will fly in a near-equilateral triangle formation, with a constant distance of 2.5 million kilometres between, following the Earth along its orbit at a distance of around 50 million kilometres. The configuration is sketched in the following image, which is not so scale; the LISA triangle itself is drawn larger than life, and if the satellites were drawn to scale (each is three metres in diameter), they would not be visible in the image at all: 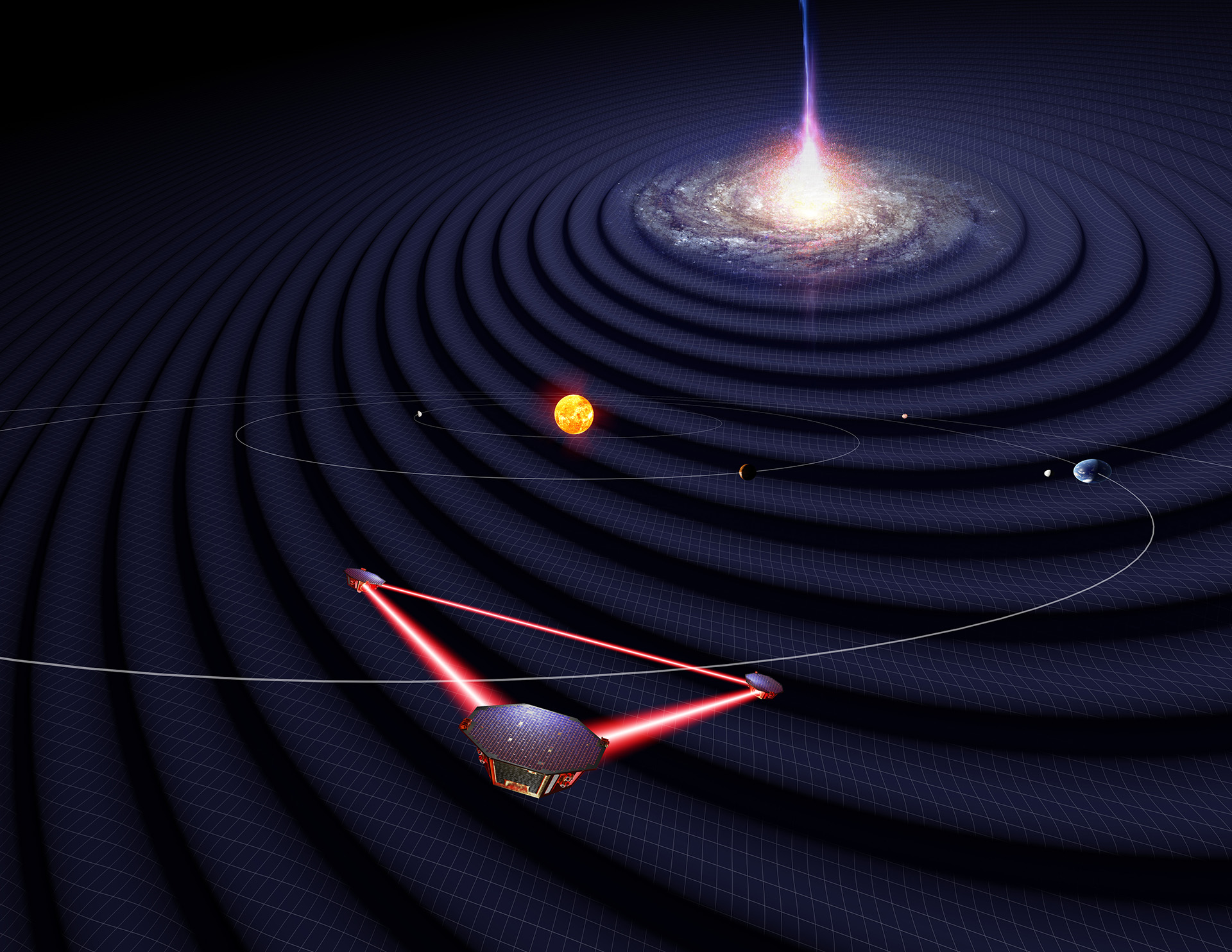 LISA constellation within our solar system in front of gravitational waves emitted by an active galaxy / © University of Florida / Simon Barke (CC-BY 4.0)

The triangle’s orientation changes during each orbit. This fact enables researchers to determine the direction of gravitational waves reaching LISA.

LISA works similarly to a so-called Michelson interferometer. However, in contrast with a Michelson interferometer, it does not split light into two portions, sending each to be reflected back by a distant mirror.  Instead, the mother satellite sends a laser beam to each of the two daughter satellites. Because of the great distance, the laser beam that reaches a satellite is much too weak to reflect back. That’s why the satellites do not contain mirrors – instead, they actively send back laser light in response to whatever light reaches them. Comparison of the original laser beam and the response is used to monitor changes in the distance between the satellites. In this way, distance changes can be measured with a precision of the order of fractions of a picometre (1 picometre = 10-12 metres). For this, it is of crucial importance that the free falling test masses in the satellites remain undisturbed by external influences such as Solar wind – the stream of particles constantly being emitted by our Sun.

One of LISA’s tasks is to listen to signals from the hot early phase of our universe, corresponding to a cosmic time of tiny fractions of a second. However, LISA’s primary objective is the detection and examination of gravitational waves emitted by the supermassive black holes that reside in the centres of many galaxies. In addition, LISA will measure the signals of thousands of compact binary star systems in the Milky Way.

LISA is the result of decades of development in the area of laser interferomtry, propulsion and sensor technology. The new technologies have been tested in space by the LISA pathfinder mission in 2015. LISA is set to commence in 2034. In both missions, the Max Planck Institute for Gravitational Physics plays a leading role.

More information about LISA can be found on the project’s websites:

Note that for some years, the LISA project was dubbed eLISA.

is a scientist at the Albert Einstein Institute in Hannover who is involved in the maintenance and development of the gravitational wave detector GEO600.

Descent into a black hole
The many ways of building an empty, unchanging universe

Abbreviation for "Light Amplification by Stimulated Emission of Radiation". Technique for the production of very concentrated, strong light with a fixed frequency, which propagates as a very simple electromagnetic wave in which wave crests and wave troughs are in perfect step ("coherent light").