An article by Gerhard Heinzel

GRACE Follow-On is the continuation of the highly successful German-American mission GRACE (Gravity Recovery and Climate Experiment), whose satellites orbited the Earth about 90,000 times between 2002 and 2017, measuring the gravitational field of our home planet. In the successor of the experiment, again, two satellites move around the Earth on identical orbits, 200 kilometers apart from each other and at an altitude of about 490 kilometers. The satellites orbit the Earth every 90 minutes on paths that cross the poles. Because of the Earth’s rotation, the satellites survey adjacent strips of the surface during successive orbits.

Over a large accumulation of mass, such as a mountain range, the Earth’s gravitational field is a tiny bit stronger than over open water, for example. This causes the first satellite to accelerate, increasing the distance between the two by a fraction of a millimeter – when the trailing satellite reaches the spot, it catches up again. From these small distance variations, collected over many orbits, the gravity field and thus the mass distribution of the entire Earth can ultimately be reconstructed. 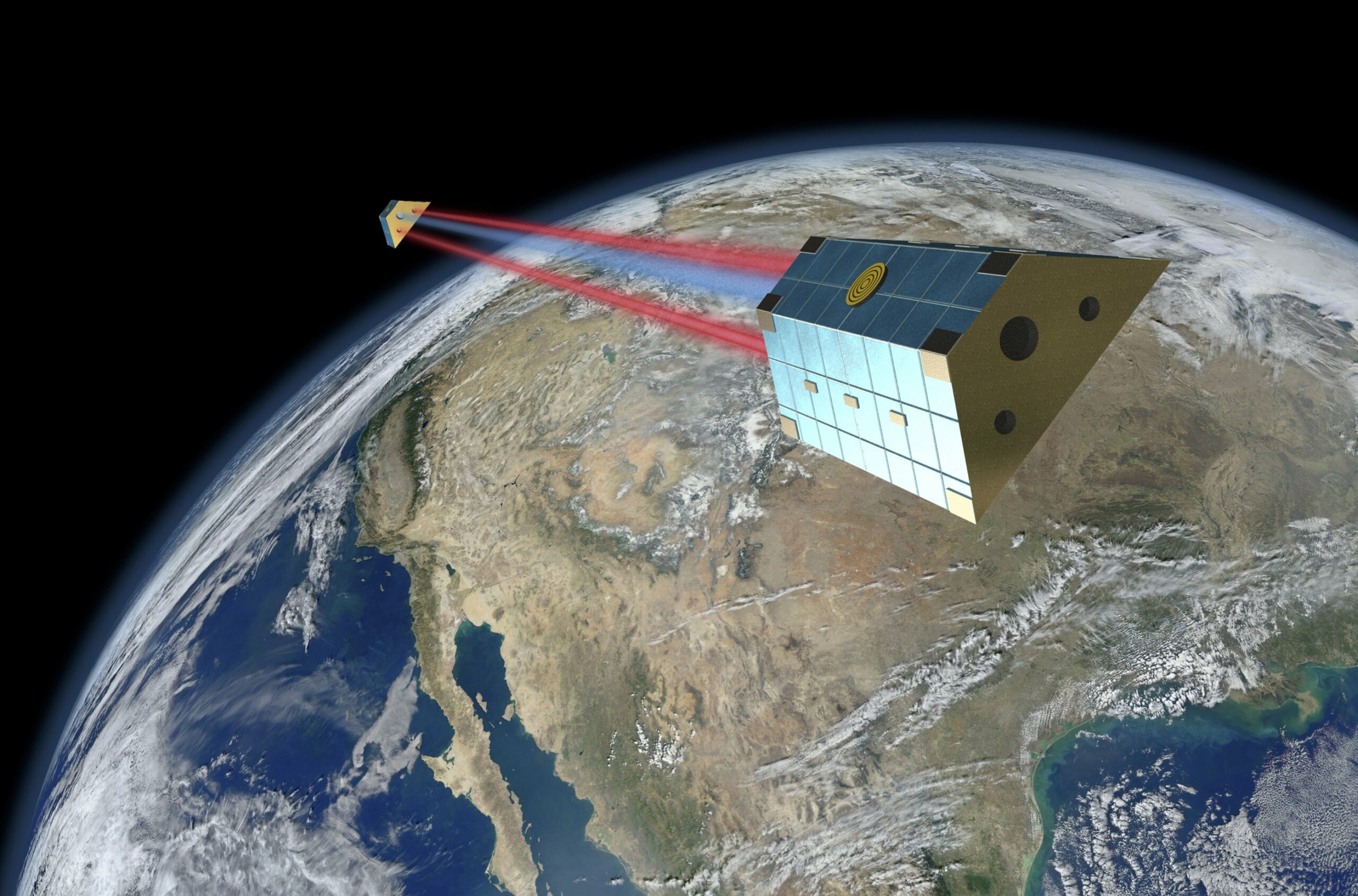 GRACE Follow-On is a tandem of two satellites orbiting the Earth at a distance of 220 kilometers on the same orbit at an altitude of 490 kilometers above the Earth’s surface. The mission measures the distance between the satellites using microwaves (blue) and a new laser interferometer (red). © Earth: NASA “Blue Marble,” satellites: Schütze/AEI

Temporal changes in the gravity field are of high interest to geophysicists and climate researchers, as they can be used to measure indicators of climate change. These include, for example, the melting of the polar ice caps and changes in groundwater levels. However, these temporal changes in the gravity field are also much weaker than the static gravitational anomalies that result, for example, from the flattening of the Earth. The satellites must therefore measure their distance down to micrometer or even nanometer accuracy, to allow to distinguish the temporal changes from the static ones. The previous mission between 2002 and 2017, GRACE, successfully used microwaves to this end, with an accuracy of one to two micrometers.

A follow-up mission with future technology

The GRACE data, and in particular the long-term trends that could, for the first time, be measured with it, have become irreplaceable for climate research and related fields. Thus, around 2008, it was decided to launch a follow-up mission called GRACE Follow-On. It was supposed to continue the stream of valuable measurement data with as short a gap as possible after the end of the GRACE mission in 2017.

To save time and avoid the risks associated with entirely new developments, GRACE Follow-On was essentially planned as a copy of GRACE, with the same German-American team and the same instruments. That is why GRACE Follow-On also relies primarily on microwave measurements.

In addition, a future technology is being tested for the first time on GRACE Follow-On: laser interferometry. Researchers at the Albert Einstein Institute (AEI) in Hanover have been developing this technology for 20 years for the gravitational wave observatory LISA, which is intended to observe gravitational waves from astrophysical objects in space to explore the invisible, gravitational side of the universe. It will measure minute changes in distance between satellites using laser light. Many of the novel techniques required are also ideally suited for GRACE Follow-On.

A laser interferometer from Hanover

In 2008, NASA approached the AEI and proposed that they jointly develop such a laser instrument and use it on GRACE Follow-On. Thus was born the Laser Ranging Interferometer (LRI), which was planned, constructed and launched into space within eight years – an astonishingly short time for such projects.

The LRI is organized as a partnership program between NASA, the German Research Center for Geosciences (GFZ) in Potsdam and the Albert Einstein Institute, together with the German Aerospace Center (DLR) and the German space industry, funded by the German Federal Ministry of Education and Research (BMBF). NASA is supplying the laser, the resonator for frequency stabilization and the electronics for phase readout. Germany is supplying the optical system with associated electronics. 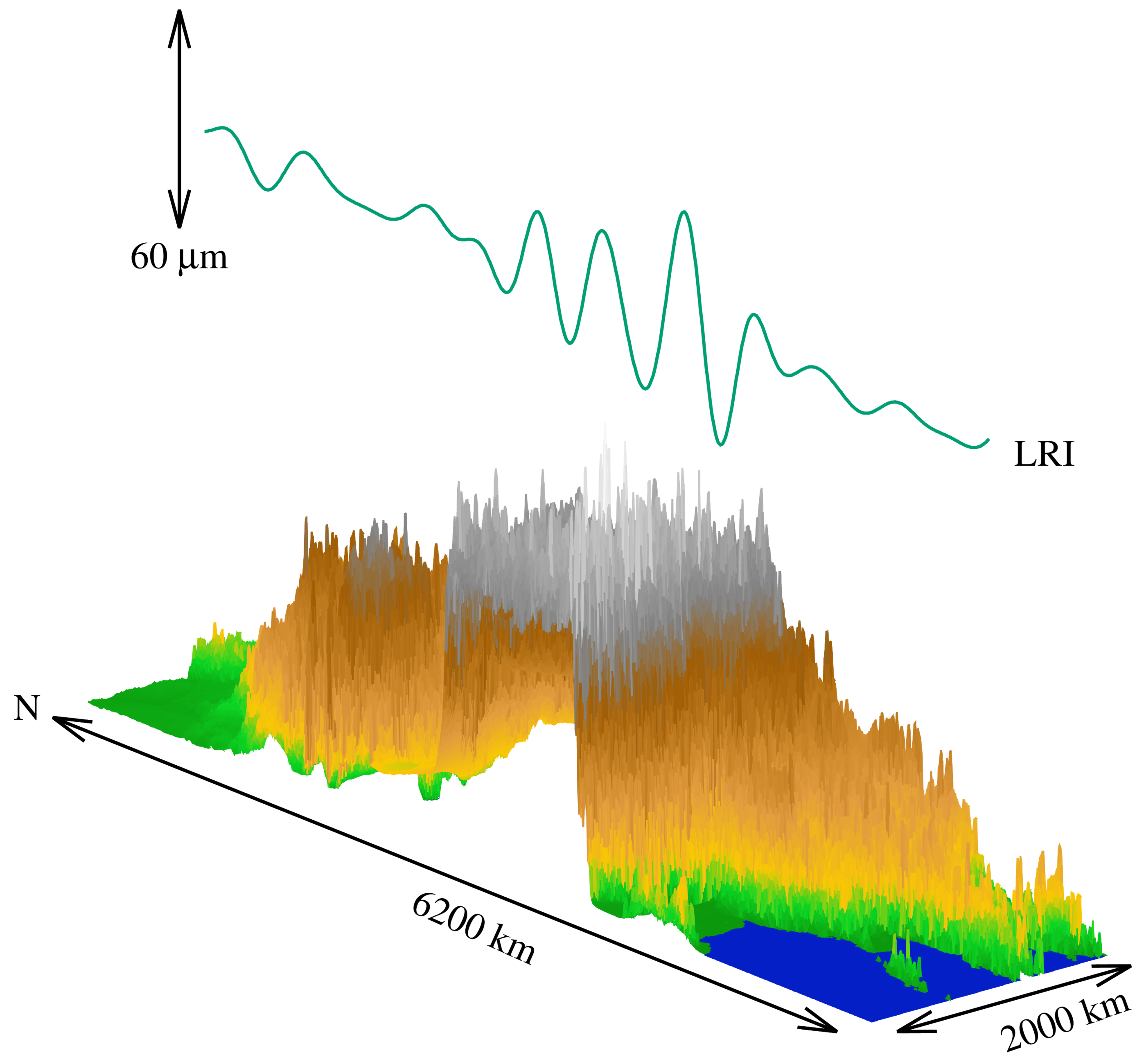 Elevation profile of the Himalayas, from remote sensing data of the Shuttle Radar Topography Mission, in the center of the right axis is Myanmar. Above, the filtered measurements of the novel Laser Ranging Instrument (LRI) during the overflight at 490 km altitude and 200 km separation. © G. Heinzel/Max Planck Institute for Gravitational Physics; GRACE-FO data: NASA, GFZ, JPL; Map data: SRTM

LISA technology in use for climate research

In May 2018, GRACE Follow-On launched on a Falcon 9 rocket from Vandenberg Air Force Base in California. Once in orbit, the satellites underwent some routine tests, and the microwave instrument started operation. Turning on the LRI’s laser and electronics was a particularly exciting moment for the AEI researchers: The tricky task was to adjust the laser beams from both satellites so that they hit the other’s receiver, which was a couple of centimeters in size, at a distance of 200 km. For this difficult task, the researchers had developed a search procedure in which the satellites spiraled the position of the laser beams. This search was successful, and the LRI started measurements on June 14, 2018. What was originally planned as a three-month experiment was still reliably delivering data two and a half years after launch. What is more, the LRI’s accuracy is orders of magnitude better than that of the microwave instrument, so that further follow-up missions will likely exclusively rely on laser technology and retire the microwave instrument.

The German LRI contribution was financed by the Federal Ministry of Education and Research (BMBF, project 03F0654B) and the German Aerospace Center (DLR). The German Research Center for Geosciences (Deutsches GeoForschungsZentrum, GFZ) is in charge of the entire German contribution to GRACE Follow-On, which, in addition to the LRI, also includes the rocket launch and operations.

Find more information of GRACE FO on the website of the Max-Planck-Institute for Gravitational Physics. A YouTube video about the technology can be found here.

Gerhard Heinzel is a physicist at the Max Planck Institute for Gravitational Physics in Hanover and leader of the space interferometry research group.

Abbreviation for "Light Amplification by Stimulated Emission of Radiation". Technique for the production of very concentrated, strong light with a fixed frequency, which propagates as a very simple electromagnetic wave in which wave crests and wave troughs are in perfect step ("coherent light").

gravity (gravitation)
In classical physics: An action-at-a-distance force by which all bodies that possess mass attract each other (see Newtonian theory of gravity), synonym: gravitational force. In Einstein's general theory of relativity: The fact that matter that possesses mass, energy, pressure or similar properties distorts spacetime, and that this distortion in turn influences whatever matter might be present. An introduction to the basic ideas of general relativity is provided by the section General relativity of Elementary Einstein. More information about the nature of gravity in general relativity can be found in the spotlight text Gravity: From weightlessness to curvature.
frequency

field
A field describes how a physical quantity is distributed in space and time. For instance, the area where electric forces act on a test particle is subject to an electric field. Or the gravitational forces which act on the mass of a test body define a gravitational field. In general a field contains energy, occupies space and can change over time.
Earth
Our very own planet in the solar system - the third planet from the sun. The earth has a mass of about 6 trillion trillion (in exponential notation, 6·1024) kilograms.
charge
A measure of the strength of a force (action-at-a-distance) originating from a body, and of how susceptible it is to being influenced by other bodies via the same force. The most famous example is electric charge: Electrically charged bodies act on other electrically charged bodies via an electric force whose strength is proportional to the electric charges of the bodies involved. It is a characteristic property of charges that they are conserved; they can neither be created from nothing nor simply disappear. For instance, when a positron with electric charge +1 (in suitable units) and an electron with electric charge -1 annihilate to give electromagnetic radiation, overall charge conservation is satisfied: Before the annihilation, the sum of the electric charges was 1+(-1)=0, and afterwards, when there is only uncharged electromagnetic radiation left, it is also zero. In the context of particle physics, there are more abstract charges not directly connected with forces and interaction, but subject to similar conservation laws.