A brief history of gravitational lensing

An article by Tilman Sauer

Einstein’s derivation of the deflection of light in the Sun’s gravitational field, and the agreement between the quantitative prediction for that deflection based on his theory of general relativity and the observations made by an expedition under the leadership of Arthur Stanley Eddington (1882-1944), constitute one of the best-known episodes in the history of general relativity.

However, there is a lesser-known, but closely related fact. As early as 1912, a good three years before his final breakthrough in the formulation of general relativity, Einstein wrote down a concise description of one of the most important consequences of the deflection of light: The possibility of a (geometric) gravitational lens.

Such a lens consists of a mass M which deflects light from a distant light source S in such a way that the light reaches an observer O along two different paths. As a consequence, O will see two distinct images of S:

Einstein jotted down the basic properties of such a gravitational lens in one of his notebooks, presumably on the occasion of a visit to Berlin in April 1912. At that time, he had met up with the astronomer Erwin Freundlich (1885-1964), with whom he discussed different possibilities of testing his ideas using astronomical observations. The notebook contains rough sketches as well as the basic formulae needed to describe the lens effect. One of the pages is reproduced in the following image: 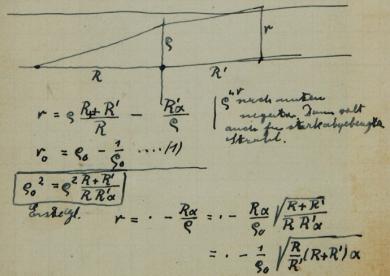 [Published as part of the Collected Papers of Albert Einstein, Vol. 3, p. 585; Reprinted by permission of Princeton University Press]

At the time, Einstein must have concluded that the lens effect would not actually be observable. In fact, the angle between the two images depends on the mass of the lens object as well as the distances between source, lens mass and observer; it is exceedingly improbable for two stars to be aligned so precisely as to produce a double image observable from Earth.

In the following years, the idea of a gravitational lens made its appearance in a number of different publications. Einstein himself mentions the phenomenon in a letter written on December 15, 1915 to his friend Heinrich Zangger (1874-1957), a professor of forensic medicine at the University of Zurich. It is also the subject of a brief article written by the physicist Oliver Lodge (1851-1940) and published in the journal Nature. Furthermore, gravitational lensing is discussed by Eddington in his book “Space, Time, and Gravitation”, which was published in 1920, and also in an article in the prestigious journal Astronomische Nachrichten, authored by the Russian physicist Orest Chwolson (1852-1934). However, all authors agreed that the phenomenon would not be observable – that there was no chance for terrestrial astronomers to find a gravitational lens in the sky.

In 1936, when Einstein was living in Princeton – having emigrated to the US three years earlier – he received a visit from a Czech emigré and amateur engineer by the name of Rudi W. Mandl. Mandl had come up with some far-reaching ideas, and he was eager to discuss them with his famous host. Among other things Mandl, too, had come up with the idea of a star acting as a gravitational lens, but he had gone even further and speculated that high-intensity starlight, focused by such a lens, might have influenced biological evolution here on Earth, by increasing the rate of genetic mutations.

Einstein received Mandl quite graciously. It seems that he had forgotten his own, earlier work on gravitational lenses, and evidently he was not familiar with what others had published since. In his discussions with Mandl, he conceded that the idea of a gravitational lens had merit, but persuaded Mandl to abandon his more outlandish musings.

Asked by Mandl to publish on the subject of gravitational lensing, Einstein at first declined, citing the fact that the phenomenon was unobservable. But Mandl persevered, and eventually, Einstein agreed to a brief publication in the journal Science: 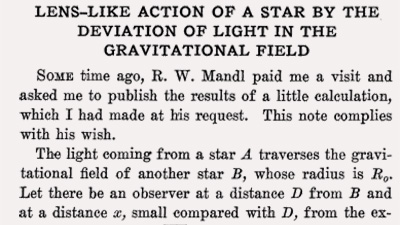 In this brief note, Einstein also presented formulae for the optical properties of a gravitational lens. They are the exact same formulae which he had derived some 24 years earlier, right down to the formula for the magnification factor. Mandl receives an honourable mention as the person who had asked Einstein to derive and publish these results.

Fall-out of the article in “Science”

Right after Einstein’s brief text had been published, it was followed by a number of articles by well-known scientists, who picked up where Einstein had left off.

Fritz Zwicky (1898-1974), an astronomer at the California Institute of Technology, discussed the possibility of observing the lensing effect in the case of the recently discovered extragalactic nebula, in other words: other galaxies. The typical masses, sizes and mutual distances of galaxies are such that double images of a distant galaxy should be significantly more frequent than double images of stars: The necessary near-alignment of a closer object, a more distant object and an observer here on Earth is much more probable for galaxies than for stars.

Henry Norris Russell, the astronomer from Princeton, published an article in which he speculated about the inhabitants of a hypothetical planet orbiting the White Dwarf companion of the star Sirius. What would they see during a total eclipse – on the occasion when, from the point of view of these inhabitants, the White Dwarf star would move in front of the more distant Sirius? As White Dwarfs are very compact objects, light from Sirius passing close to the companion would be markedly deflected. Of course, astronomers on Earth would not be able to see this relativistic gala performance, and in fact Russell cites this scenario as a perfect test of relativity theory which, regrettably, is impossible to put into practice.

Indisputably, Einstein’s little publication had lent credibility to the idea of gravitational lensing, and the concept became part of the general knowledge of theoretical astronomers.

Quasars and the first observation

The discovery of quasars in the early 1960s led to renewed interest in the theory of gravitational lensing, with notable contributions by Yu. G. Klimow, S. Liebes Jr. and S. Refsdal. Quasars are extragalactic objects, and they are both very distant and extremely bright. These properties combined make a distant quasar as a light source paired with a less distant galaxy as the deflecting mass an ideal candidate for an observable gravitational lens.

By that time, the models of gravitational lensing under discussion were already significantly more complex than for the early calculations. In fact, the description of a gravitational lens is simple only in the approximation of geometric objects, with light rays emitted by point-like sources deflected in a gravitational field with perfect spherical symmetry. In contrast, in any realistic situation neither the light source nor the lens mass will exhibit perfect symmetry. For more general situations, there is a much greater variety of possible images. One example is a fourfold image evenly grouped around a central image (however, the central image is not usually visible) – the cosmic version of a four-leaf clover, called an “Einstein cross”. Other examples include multiple images, rings and similar shapes, or arc-like deformations. Einstein’s simple derivation is woefully inadequate when dealing with these images – they are described using significantly more complicated models based on general relativity. Such models produce candidate shapes for possible gravitational lens images, and it is then up to astronomers to identify their real-life counterparts in the night sky.

The first gravitational lens was found in 1979 by Dennis Walsh, Robert F. Carswell and Ray J. Weymann, who identified the double quasar Q0957+561 as a double image of one and the same distant quasar, produced by a gravitational lens. The following illustration is a false color image of the object in question, based on radio observations:

As seen from Earth, the angular distance between the two images is roughly six seconds of arc – the same as the apparent size of a compact disc (CD) viewed from a distance of four kilometres.

This first identification of a gravitational lens was soon followed by others. The image below shows a beautiful Einstein cross – a lensing system producing a four-leaf clover – formed by the quasar QSO 2237+0305. It was discovered in 1985:

The year 1988 saw the discovery of the extended radio source with the astronomical designation MG1131+0456, which turned out to be the first example of an “Einstein ring”, with a diameter of 1.75 seconds of arc:

The reason for the field’s growth is that, today, gravitational lenses are much more than just an interesting general relativistic phenomenon. Now that a significant number of lens systems has been identified, lensing is used more and more as an observation tool, allowing astronomers to answer astrophysical as well as cosmological questions, from estimates of the amount of dark matter contained in the lens mass to the determination of fundamental parameters of the big bang models.

Introductory information about Einstein’s theory of gravity can be found in the section General relativity of Elementary Einstein.

Related spotlight texts on Einstein Online can be found in the category General relativity.

The Einstein notebook mentioned in the text has been published in M. J. Klein, A. J. Kox, J. Renn und R. Schulman (Hg.), “Collected papers of Albert Einstein” Vol. 3, Princeton University Press 1993, Appendix A. We would like to thank Princeton University Press for their permission to use the above image. Also, we would like to thank the AAAS and Science Magazine for permission to reprint the first lines of Einstein’s 1936 article.

Einstein’s writings can be accessed online thanks to the website Einstein Archives Online. There, you will find both the 1912 entry in the notebook and the manuscript for the 1936 Science article.

is Senior Scientific Editor of the Collected Papers of Albert Einstein, the Einstein Papers Project at the California Institute of Technology. His main research interest are Einstein’s writings about relativity and his unified field theories. His contribution to Einstein Online is the spotlight text A brief history of gravitational lenses.

Of gravitational waves and spherical chickens
The realm of relativistic hydrodynamics

Elementary "building block" of geometrical entities such as surfaces or more general spaces. For instance, a surface is the set of all its points, of all possible locations on the surface, and all geometrical object in that surface are defined by the points that belong to them - for instance, a line on the surface is the set of (infinitely many) points.

Einstein Papers Project
Project at the California Institute of Technology which is dedicated to publish a full and annotated edition of Einstein's writings and correspondence (the Collected Papers of Albert Einstein). Einstein Papers Project webpages Online archive of Einstein's writings
Earth
Our very own planet in the solar system - the third planet from the sun. The earth has a mass of about 6 trillion trillion (in exponential notation, 6·1024) kilograms.