One of the most surprising features of special relativity is that a number of statements and results which we usually think to be absolute turn out to be observer-dependent. In particular, statements about space and time, distances and duration turn out to be relative.

For example, in Einstein’s theory, simultaneity is a relative concept. Imagine that there are two events which an observer in space station A judges to be simultaneous – say, the explosion of a firecracker at one point in space and an alarm clock going off a few miles away. For an observer in space station B, which is moving relative to A, this statement will not necessarily be true: In general, such an observer will come to the conclusion that one of the events happened earlier than the other. (More about this unfamiliar state of affairs and about the necessity to first of all define simultaneity can be found in our Spotlight topic The definition of “now”.)

Similarly, temporal duration depends on the observer. This relativistic effect is called time dilation. Summarized briefly: Moving clocks are slower than stationary ones. A bit more precisely: An observer on station A measures time using his on-board clock. Station B, passing A at high speed, has an exact copy of A’s clock on board. Yet, from the point of view of A, the clock in station B runs more slowly than his own. A down-to-earth version of this effect can be tested with the help of elementary particles such as those particles accelerated inside the “proton synchrotron” of the European research centre CERN. A segment of this particle accelerator can be seen in the following photograph: 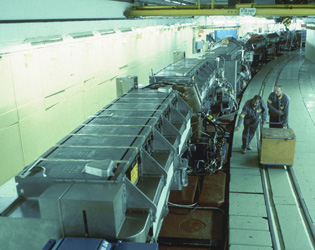 Many kinds of elementary particles are unstable. After some time has passed, they decay into certain other elementary particles. The average time until decay is called the particle’s life-time. When particles of the same kind that are either at rest or speeding around in a particle accelerator are compared, it turns out that the life-time of unstable particles at rest is significantly shorter. Experiments of this kind are in excellent agreement with the predictions of special relativity – from the point of view of an external observer, the “inner clock” of such particles slows down when such particles are accelerated to high speeds. Correspondingly, on average, they can take much longer to decay than particles at rest.

Time dilation has a counterpart in space called length contraction. From the point of view of an observer in space station A, who measures lengths using his own measuring rod, an exact copy of that same measuring rod whizzing by on-board space station B appears to be shortened.

Previous part: The principle of relativity
Next part: The speed of light
Tour index

time
It is a fact of life that not all events in our universe happen concurrently - instead, there is a certain order. Defining a time coordinate or defining time, the way physicists do it, is to define a prescription to associate with each event a number so as to reflect that order - if event B happens after event A, then the number associated with B should be larger than that associated with A. The first step of this definition is to construct a clock: Choose a simple process that repeats regularly. (What is "regular"? Luckily, in our universe, all elementary processes such as a swinging pendulum, the oscillations of atoms or of electronic circuits lead to the same concept of regularity.) As a second step, install a counter: A mechanism that, with every repetition of the chosen process, raises the count by one. With this definition, one can at least assign a time (the numerical value of the counter) to events happening at location of the clock. For events at different locations, an additional definition is necessary: One needs to define simultaneity. After all, the statement that some far-away event A happens at 12 o'clock is the same as saying that event A and "our clock counter shows 12:00:00" are simultaneous. The how and why of defining simultaneity - a centre-piece of Einstein's special theory of relativity - are described in the spotlight topic Defining "now". With all these preparations, physicists can, in principle, assign a time coordinate value ("a time") to any possible events, and describes how fast or how slow processes happen, compared to that time coordinate.
time dilation
In special relativity: From the point of view of an observer (more precisely: an inertial observer), a moving clock goes slower than an identically built clock at rest. All other processes moving alongside the clock (for instance: everything happening aboard a rocket speeding by) are slowed down in an identical fashion. Time dilation can be mutual: When two inertial observers speed past each other, each will find that the other's clocks go slower.Some aspects of this unfamiliar mutuality are explored in the spotlight topic The dialectic of relativity; a geometric analogy is presented in Time dilation on the road. In general relativity, there is the phenomenon of gravitational time dilation: Roughly speaking, clocks in the vicinity of a mass or other source of gravity run more slowly than clocks which are farther away. This phenomenon is closely related to the gravitational redshift.
synchrotron

stationary
Roughly speaking, in relativity, a situation or a spacetime is stationary if there is no change over time. To be more precise, one has to take into account that, in general relativity, time can be defined in many different ways, all of them equally valid for formulating the laws of physics. This leads to a modified definition: A situation or a spacetime is stationary if it is possible to define time in a way so that there is no change of its properties over time - if you follow the properties of a given region of space over time, they will not change.
speed
An object's average speed is the distance it moves during a given period of time, divided by the length of the time interval. If you make the time interval infinitely small, the result is the object's speed at one particular moment in time. The notion of speed can be applied to waves in different ways; for instance, for a simple wave, the phase speed is the speed at which any given wave crest or wave propagates through space. See also the more general entry velocity.
special relativity
Albert Einstein's theory of the fundamentals of space, time, and movement (but not gravity). For a brief introduction, check out the chapter Special relativity of Elementary Einstein. Selected aspects of special relativity are described in the category Special relativity of our Spotlights on relativity.
space
In a strict sense: Space as we know it from everyday life: the totality of all locations in which objects can sit, with three dimensions. In a more general sense used by mathematicians, all kinds of sets of points are spaces - a line for instance, which has but a single dimension, or a two-dimensional surface, but also higher-dimensional spaces. Also, in such more general spaces, geometry can be different from the standard Euclidean geometry taught in high schools - such spaces can be curved.
relativistic
Models, effects or phenomena in which special relativity or general relativity play a crucial role are called relativistic. Examples are relativistic quantum field theories as theories based on special relativity, or the relativistic perihelion shift as a consequence of general relativity. In addition, conditions under which the difference between relativistic physics and ordinary, classical physics are especially pronounced, are also called relativistic. For instance, when material objects reach speeds close to speed of light, one talks of relativistic speeds, while speeds that are so small compared to light as to make relativistic effects undetectably small are non-relativistic.
proton
Particle that carries positive electric charge and is comparatively massive; the atomic nuclei consist of protons and neutrons. Protons are not elementary particles, they are compound particles consisting of quarks that are bound together through the strong nuclear interaction . Collectively, protons, neutrons and a number of similar particles are called baryons.
point
Elementary "building block" of geometrical entities such as surfaces or more general spaces. For instance, a surface is the set of all its points, of all possible locations on the surface, and all geometrical objects in that surface are defined by the points that belong to them - for instance, a line on the surface is the set of (infinitely many) points.
relativistic (perihelion advance, relativistic)
For planetary orbits, there is a small difference between the predictions of Newtonian gravity and general relativity. For instance, in Newton's theory, the orbital curve of a lonely planet orbiting a star is an ellipse. In general relativity, it is a kind of rose or rhodonea curve. Such a curve is similar to an ellipse curve, which shifts a bit with each additional orbit. The shift can be defined by looking at the point which is closest to the sun (perihelion) on each orbit. The additional relativistic shift is, hence, called relativistic perihelion shift or relativistic perihelion advance. A picture can be seen on the page A planet goes astray in the chapter General relativity of Elementary Einstein.
particle accelerator
The most important experimental technique of particle physics: accelerating electrically charged particles with the help of electric forces, make them collide with each other and, from the result of the collision, draw conclusions about the properties of elementary particles and their interactions. It is an intriguing possibility, suggested by models based on the ideas of string theory, that particle accelerators such as the LHC might actually produce miniature black holes (for more about this, see the spotlight text Particle accelerators as black hole factories?).
observer
In the context of relativity, "observer" can mean two different things. Often, observer is synonymous with reference frame or (spacetime-)coordinate system: An observer in this sense is someone who assigns coordinates to everything that happens around him. In particular, all events are assigned space coordinate values and a time coordinate value. In the context of special relativity, it is often the case that when one talks about an observer, what is really meant is an inertial observer, corresponding to a special type of reference frame. On other occasions, the term is used in a more narrow sense - in those cases, an observer is someone sitting at a certain point in space and using the light signals reaching that location to construct an image of his surroundings. In the context of optical effects in relativity, for instance gravitational lensing, observer is usually meant in this way.
length contraction

Effect of special relativity theory: An observer (more precisely: an inertial observer) measures a shorter length for a moving object than for an identical copy of that object resting beside him (here, length refers to extension in the direction of movement - extension in orthogonal directions remains the same).