Very long baseline interferometry (VLBI) can be used to measure deflection of light by the sun with very high accuracy, which allows the testing of a prediction of general relativity.

An article by Irwin I. Shapiro

This first successful attempt to measure the gravitational deflection of starlight was, as implied above, not very accurate. Such measurements of the direction of incoming visible light rays, when made from the surface of the Earth, are limited in accuracy by the blurring effects of the atmosphere on the paths of light rays – the cause of the “twinkling” of stars seen in the night sky. Repetitions of these optical observations of the solar deflection of starlight, with improved instrumentation, over the following half century, thus have exceeded the accuracy of the initial results at best by only a factor of a few. An example of this twinkling is shown in the following animation:

[Image: Applied Optics Group (Imperial College) and William Herschel 4.2-m telescope.
It was made from ten high-resolution images, taken in quick succession, of the star Betelgeuse (in the constellation Orion). The field of view is 2.3 arcseconds.]

A breakthrough came in 1967 with the realization that a special technique involving radio telescopes could be used to obtain the positions of compact radio-emitting cosmic objects with more than a thousand times higher accuracy than could be achieved with an earth-based optical telescope [1]. With this technique, the apparent positions on the sky of such sources can be monitored with high accuracy, as the Sun circles the sky over the course of a year.
The technique, called very-long-baseline interferometry (VLBI), involves an array of radio telescopes that can be spread around the globe (and also into space), with all of the telescopes receiving radio waves simultaneously from the same astronomical source. The crucial point is that each of the waves emitted by the source generally arrives at the different telescopes at different times. Since each telescope is at a different location on the Earth (or above it), each telescope will in general be at a different distance from a source. Hence, the travel times of a wave from the source to these telescopes will be different, as in the following animation. Simplified and not to scale, this animation shows a source near Earth. In reality such sources would likely be a few billion light years away. Also, the telescopes are shown as far too large compared to the size shown for the Earth. The animation does, however, capture the basic principle:

In the animation, the radio source is the blue disk at the top, and the crests of the radio waves are shown as circles. Whenever one of the radio telescopes is reached by a crest, the telescope is momentarily highlighted. Clearly, each wave crest arrives at the left telescope before it reaches the right one. If the radio source were somewhat further to the right, its waves would reach both telescopes simultaneously; even further, and the right telescope would receive each wave crest first.
Conversely, by measuring which wave arrives when at each telescope, radio astronomers can pinpoint a source’s direction in the sky. In particular, the method enables them to measure the angular separation of compact objects like quasars with an accuracy that can be well under 1 millisecond of arc, which corresponds approximately to the angle subtended by a man on the moon, seen from Earth.
With this technique, for the first time ever an image of the near surroundings of a black hole was obtained in 2019.

Through monitoring of the changes with time in the apparent positions of very distant compact radio sources, the deflection predictions of general relativity can be tested.
As an example, below, the Sun passes three fictitious compact sources in the sky:

Note that these sources (white spots) are to a very good approximation point-like, i.e. they show no, or very little, structure even when observed with the highest-resolution VLBI. The numbers give the apparent angular separations from each other of the three compact objects, in degrees. The source separations are meant to be to scale relative to the angular size of the Sun, but the apparent position shifts have been magnified by a factor of 5000 in order to render them visible. The animation has also been speeded up; in real life, it would take the Sun several days to traverse the region of the sky shown in the picture.
With the use of a single optical telescope on the Earth, the deflection can be detected only when the distant light source, the Sun, and the observer are almost lined up, and only during a total solar eclipse. Optical interferometry – combining optical telescopes in an interferometric array – on the Earth cannot yet do much better in measuring the deflection. By contrast, the radio interferometry measurements are sensitive enough to detect the deflection at virtually any angular separation of the Sun and a compact radio source. Even when the Sun and the compact source are at nearly opposite points on the sky, the minute position change, amounting to only a few milliseconds of arc, can easily be detected!
Since 1967, several such radio interferometric experiments have been carried out, yielding increasingly accurate tests of general relativity. The most accurate of these tests through the first few years of the 21st century was completed in 2004 [2].

The results published in 2004 were based on about 1.7 million VLBI measurements, taken during the two decades from 1979 through 1999 with the help of 87 different radio telescopes. The telescopes’ locations can be seen in the following map: 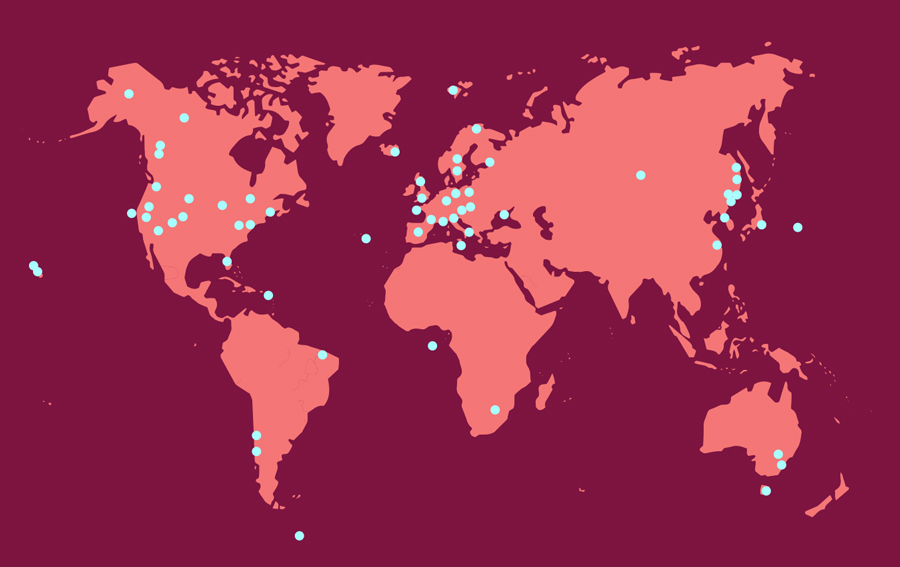 The measurements targeted a total of 541 different radio sources. Their locations are seen in the following image, superimposed on a picture of the radio sky (created from observations made at a radio frequency of 408 Megahertz). The bright horizontal stripe is the Milky Way:

Originally, all of these data had been collected for geodetic purposes, with the goals of monitoring variations in the Earth’s rotation and the motions of the tectonic plates on the surface of the Earth.
The 2004 analysis, aimed at extracting from these data information about light deflection by the Sun, showed agreement with the predictions of general relativity to within the estimated uncertainty of 0.02 percent.
This result can be expressed in terms of a parameter γ which is a measure of the curvature of space (it is one of the parameters of the so-called Parametrized Post-Newtonian formalism, a framework for testing the predictions of general relativity and related theories). In general relativity the value of γ is unity. The VLBI measurements of light deflection yield γ = 0.99983 with an estimated standard error of plus/minus 0.00045. Hence, the result is consistent with the predicted value of γ = 1 from general relativity.

The most recent result

The most recent such experiment, carried out by Titov et al. (2018) [3], yielded an improvement by a factor of about 4.5, with the result also in agreement with the prediction from general relativity.
In the future, far higher accuracy in the deflection test could be achieved by, say, an optical interferometer deployed on the Moon or in space. However, such an instrument and corresponding experiment are, mainly for economic reasons, quite infeasible at present.

is the Timken University Professor at Harvard University and a Senior Scientist of the Smithsonian Institution.