An article by Denise Müller-Dum

The epoch of gravitational wave astronomy has begun, concluded David Reitze, Executive Director of the LIGO gravitational wave detectors, according to the scientific journal Nature Reviews Physics in April 2020. While the first two observation runs (O1: September 2015 until Januar 2016, O2: November 2016 until August 2017) found 11 cosmic collisions in total, no less than 56 potential events were detected during O3, which makes, on average, one in six days.

The third observation run of LIGO, Virgo and GEO600 started on April 1st, 2019. Measurements were supposed to be performed in two chunks of six months, with a one month commissioning break in October. But the Covid-19-pandemic forced the campaign to an early end on March 27th, 2020 – one month earlier than initially planned.

Nevertheless, the list of potential events that the detectors recorded during this time is quite impressive – and accessible for everybody. For the first time, possible events were announced through a Public Alert System. It enabled astronomers to react quickly and point their own instruments at the right position in the sky, trying to capture electromagnetic signals from the origin of the gravitational wave signals. As this was a time-sensitive task, the alerts were automatically sent within minutes after the possible event and only later analyzed by gravitational wave experts. Naturally, some of the alerts turned out to be false and were retracted. In any case, proper attribution of the signals to their origin requires a thorough scientific analysis, which takes time. Fifty-six events need to be investigated in detail. And while the to-do list is still long, the first results are indeed very promising. 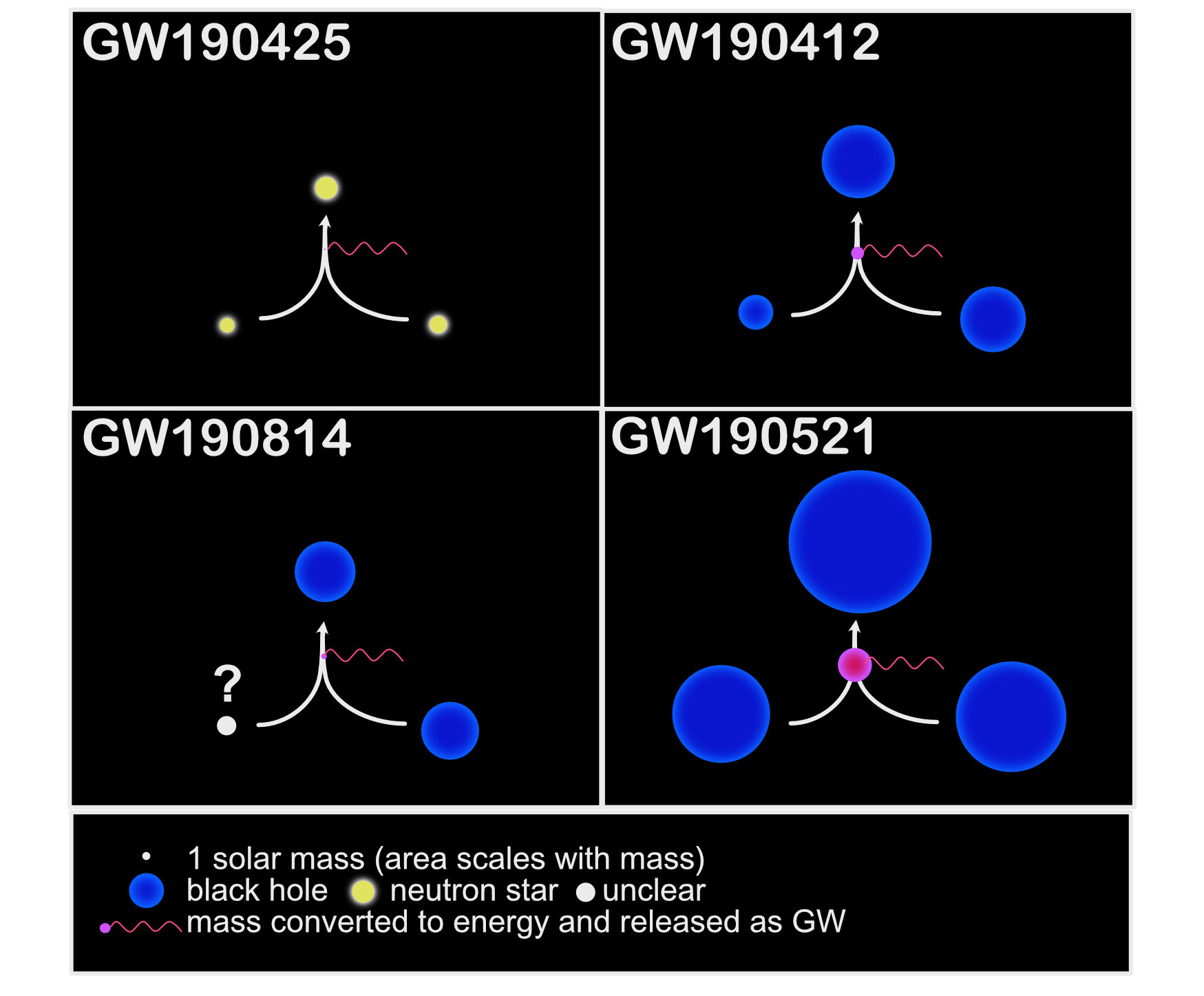 Overview of the first four published events from O3

The second neutron star merger after the premier in 2017 was observed in April 2019, soon after O3 started. What was first only seen by LIGO later turned out to also be concealed in the Virgo data. This event, GW190425, happened 290 to 740 million light years away, which is 2 to 6 times farther than the first observed neutron star merger. Researchers were surprised by the remarkable size of the binary of 3.3 to 3.7 solar masses, because this is higher than that of other known neutron star binaries. Therefore, they still aren’t entirely sure if they were dealing with a neutron star merger, or if the two objects may have been two very light black holes. More on GW190425

Another April event turned out to be a signal from two coalescing black holes of markedly different masses. It was the first time astronomers observed a binary system with such a mass ratio. The collision revealed itself with a very unique gravitational wave signal: a higher harmonic, that is, an oscillation at a multiple of the fundamental frequency – similar to overtones in music, only as gravitational waves, as predicted by general relativity. More on GW190412

Such “humming” of a higher harmonic was also identified in the readings of event GW190814. Researchers had hoped that it could be the merger of a neutron star with a black hole, which would have been the first observation of such a system ever made. After detailed analysis, they were able to confirm that the larger object was indeed a 23-solar-mass black hole. The nature of its mysterious and nine times lighter companion, however, remains unresolved: It seems too heavy to be a neutron star, but also too light for a black hole. More on GW190814

A very short signal from a heavy weight arrived at the detectors in May 2019. During the subsequent analysis, researchers realized that they had observed the most massive and most distant event so far: a coalescence of two black holes with a combined mass of 150 solar masses that happened seven billion years ago when the universe was half as old as it is today. The gravitational wave signals of this event, called GW190521, provide evidence of the birth of an intermediate mass black hole, whose one parent is unusually heavy, having researchers speculate if it may itself have formed during a merger. However, the scientific discussion on this event is still ongoing and other interpretations have been proposed. More on GW190521

is a trained physicist and geoscientist and works as a science communicator in Bremen, Germany.

merger
A merger occurs as a consequence of an inspiral, when two black holes collide to form one single bigger black hole. The emission of gravitational waves peaks during a merger.
wave