An article by Emanuel Malek

The British physicist and mathematician Roger Penrose shared one half of the Nobel Prize in Physics 2020 for his discovery that black hole formation is a robust prediction of the general theory of relativity.

The end of spacetime

The mathematical equations governing general relativity allow for solutions where matter is so densely packed into a small region of spacetime that nothing, not even light, can escape from this region, called a black hole. The black hole is separated from the rest of spacetime by an event horizon, a point of no return. According to general relativity, anything that crosses the event horizon, will never escape and inevitably fall into the center of the black hole. 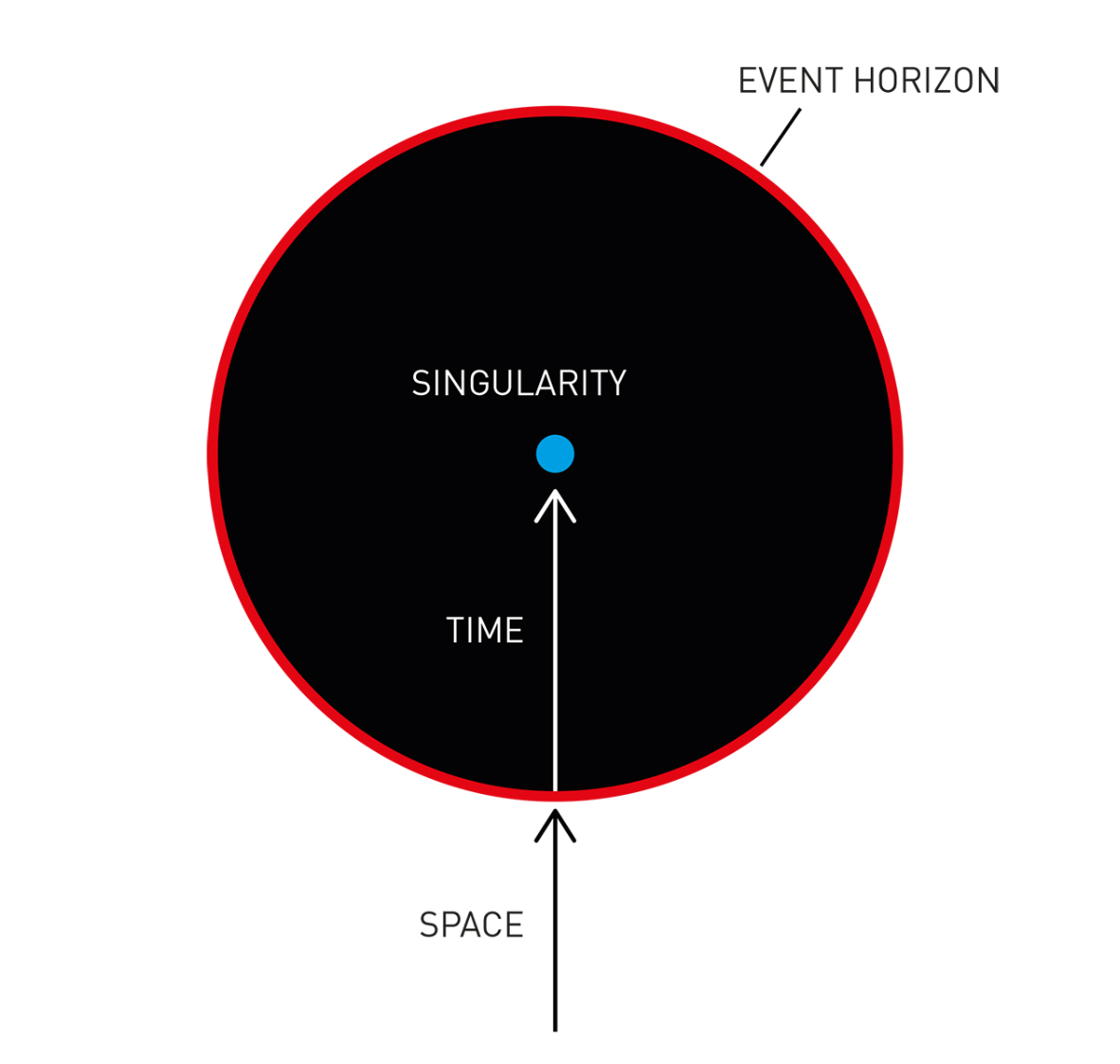 Illustration of a black hole and the singularity on its inside. ©Johan Jarnestad/The Royal Swedish Academy of Sciences

This pathological nature of the singularity, the fact that space and time will cease to exist there, is extremely worrying for general relativity. However, until Penrose’s work, it was unclear whether black holes and singularities can even exist in nature or whether they are just a mathematical artifact of the theory. In fact, all black hole solutions known by this point required a perfect symmetrical arrangement, which is impossible to achieve in nature.

Many physicists therefore long believed that black holes do not form in the real world. Consider how a black hole would form in nature. It requires enough matter and energy to be placed into a limited region of spacetime such that the gravitational force overcomes any pressure or other repulsive forces to trigger gravitational collapse, where the gravitational force becomes so dominant that all matter would be squeezed into an ever smaller space until a black hole forms. While such a theoretical process of gravitational collapse into a black hole was described already in 1939 by Robert Oppenheimer and Hartland Sweet Snyder, they assumed that the matter was made of an idealized dust, which exerted no pressure, and was arranged in a perfectly spherically symmetric manner. However, these ideal conditions will never be encountered in nature.

Could it therefore be that the smallest perturbation from spherical symmetry, or the smallest amount of pressure, will stop the formation of the black hole? One could argue that with a small perturbation, the matter may no longer collapse all onto the same point but instead the matter may overshoot. Moreover, perhaps even a small amount of pressure could stop the formation of a singularity. The complicated nature of the equations governing general relativity and the lack of modern computing power made this question difficult to answer.

Penrose proved that singularities – and by extension black holes – form generically in general relativity, without stringent symmetry assumptions and for general properties of the matter. Penrose’s key insight was to focus on how the gravitational force affects light. In general relativity, gravity exerts a force on light and causes it to deviate it from its otherwise straight path. Therefore, a heavy object will cause the gravitational lensing of light passing by it. Much like an optical lens, the gravitational force causes the light to converge onto a focal point.

Penrose showed that, if all matter has a positive energy-density, known as the weak energy condition, a trapped surface necessarily implies that the spacetime contains a singularity. Therefore, with minimal assumptions on the matter contained in the spacetime, Penrose concluded that once a trapped surface occurs, the formation of a spacetime singularity is inevitable. This also implies that singularities arise generically in general relativity, even without special symmetries. For example, in the spherically symmetric collapse scenario of Oppenheimer and Snyder, there is a trapped surface which persists even when the spherical arrangement of matter is perturbed.

The nature of the spacetime singularity

In some ways, Penrose’s singularity theorem has made general relativity even more pathological. It has shown that singularities are a robust prediction of general relativity and need not even be hidden inside black holes. Therefore, it seems as if spacetime will quite generally have holes in it, where space and time end and the laws of physics lose applicability: naked singularities.

To counter this preposterous setup, Penrose formulated the weak cosmic censorship conjecture, which states that all singularities in spacetime must be hidden behind an event horizon. This would protect the rest of spacetime from the disastrous consequences of the singularity by a black hole’s event horizon. While this statement is widely believed to be true, it has proven remarkably difficult to prove and continues to be an active area of research. One problem is that it is hard to formalize the conjecture in a way that can be (dis)proven without immediately running into counterexamples.

Penrose’s singularity theorem spurred on many developments in general relativity. For example, together with Hawking, Penrose generalized his singularity theorem in order to apply it to the universe as a whole. As a result, they were able to show that our universe must itself contain a singularity deep in its past, from which all matter and energy emanated in a Big Bang.

The fact that singularities arise generically in Einstein’s theory of general relativity has further spurred on the quest for a theory of quantum gravity, such as string theory. Such a quantum gravity theory would supersede Einstein’s theory on small enough scales in a way that is compatible with quantum mechanics. It is hoped that this theory would also cure spacetime singularities that currently plague the insides of black holes.

Learn more about general relativity and black holes in our elementary tour or read the spotlights on singularities and gravitational lensing.