An article by Andrzej Krolak

Double stars in which so called White dwarf stars orbit each other – White Dwarf binaries – are a reliable source of gravitational waves – and one that could help us map the structure of our own galaxy!

Binary and multiple stars are quite common in the universe. The formation of stars from the collapse of clouds of gas clouds results in multiple systems at least as often as in single stars like our sun. The component stars in multiple systems orbit each other because of their mutual gravitational interaction.

At the end of the 1960s, binary systems with a periods of less than one hour were discovered – it takes the stars in question less than one hour to complete one whole orbit around each other! If you describe a binary system using Newtonian gravity and the laws of classical mechanics, you will find there is a direct relation between a binary system’s period and the distance between its two components – qualitatively, the closer the two bodies, the faster they orbit each other, so the shorter their period. A period of less than one hour means that the two stars are so close together that none of them can be an ordinary star like our Sun – the Sun is simply too large to fit into such an orbit! Instead, the only possibility is that both components of the binary are what astronomers call stellar remnants – comparatively compact objects that result when a star has exhausted its nuclear fuel: white dwarfs (the final state for comparatively light stars like our Sun), neutron stars or black holes (the end states for more massive stars).

Let us focus on binaries in which both components are white dwarf stars – compact objects not much larger than the earth, but with masses between about half a solar mass and one solar mass.

There are two type of such binaries. When the two components are clearly delineated, separate stars, the system is called a detached binary. The other possibility is that the components interact in that there is a transfer of mass, with stellar material flowing from one component to the other, as sketched in this image, which shows the donor star to the right, the flow of material, and the receptor star to the left: 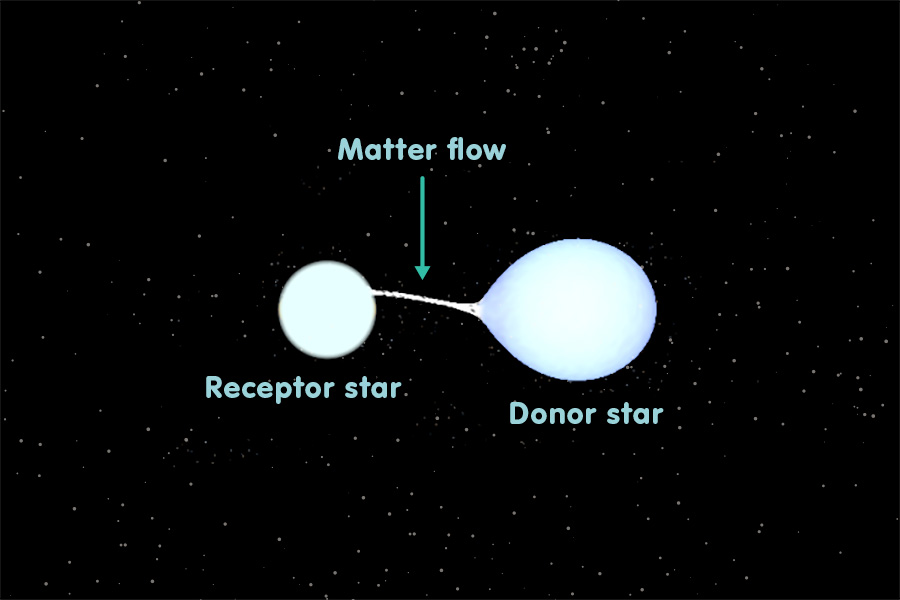 The first observation of a white dwarf binary happened in 1967. The binary was an interacting system discovered in the constellation Canes Venatici (the “hunting dogs” in pursuit of the Great Bear and the Little Bear, abbreviation: CVn). Following the astronomical conventions for star names, namely that they consist of a star identifier (a number or combination of letters) and an abbreviation of the constellation’s name, this particular binary system was named AM CVn, and ever since then, systems of this type have been called AM CVn stars.

In every binary star, the distribution of matter is determined by a balance of motion and gravity – gravity pulling inwards, centrifugal forces pulling matter away from the axis of rotation. For very close binaries, this balance leads to a characteristic hourglass shape – at least half the hourglass is clearly visible both in the image above and in the animation below, where the donor star (right) shows the characteristic distortion.

AM CVn systems are thought to have a similar shape, so they might look something like this:

According to general relativity, two masses orbiting each other will necessarily emit energy in the form of gravitational waves, coupled with a loss of angular momentum (“momentum of rotation”). In the case of AM CVn systems, the loss of angular momentum is large enough to cause significant change in the balance between gravity and centrifugal forces, leading to a transfer of matter from one component to the other. This redistribution of mass makes the binary orbit widen, consequently the orbital period increases

The first detached white dwarf binary system was discovered as late as 1988. In such systems, the inevitable loss of energy in the form of gravitational radiation has the opposite effect: The two components come ever closer to each other, and in direct consequence the orbital period becomes ever shorter.

The typical orbital frequency of a binary system depends both on the component masses and on their compactness, and it directly determines the frequency of the gravitational waves emitted by that system. For White Dwarf binaries, the frequencies are such that the proper instrument to detect them is the Laser Interferometer Space Antenna, LISA, a space-borne gravitational wave detector that might be deployed around 2034.

Compared with all other gravitational wave sources, such as binary black holes, White Dwarfs have a great advantage. We know they are there and that, at the planned sensitivity, several of them must be detectable with LISA. Once LISA is launched, these “verification binaries” will provide an important “sanity check” for the detector – if all goes as planned, their signals should show up in the data.

Studies of evolution of stars predict that the number of White Dwarf binaries is enormous. In our galaxy alone, it is estimated that there are roughly 250 million detached binaries and 10 million interacting binaries. The sensitivity of LISA will allow the detection of thousands of these binaries as individual sources. The gravitational waves from the other millions of binaries, especially towards the lower end of LISA’s frequency range, will combine to form an unresolved background – similar to a lively party at which everyone is engaged in conversation: You are likely recognize a number of individual speakers close to you, while the other conversations will emerge to give a steady background noise.

How can we distinguish this from other kinds of noise – for instance from the noise produced by the detector itself? The sensitivity of a detector like LISA depends on the direction from which a gravitational wave reaches it. But the stars are not distributed evenly in the sky. You can see this for yourself if you look up into the night sky. If the sky is dark enough, you will be able to see a dim band where the density of stars is much higher than elsewhere – the Milky Way. The following image shows a schematic representation of the night sky above Warsaw on May 1 – shown are the brightest stars, the stellar constellations and a whitish band representing the Milky Way: 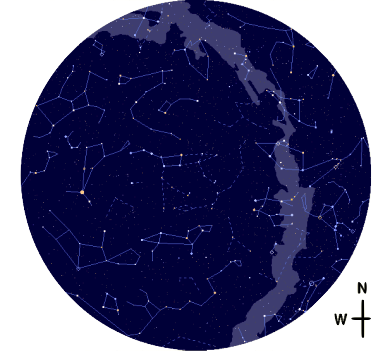 This band of stars is a consequence of the fact that our Sun is located within the gigantic spiral of the Milky Way galaxy. Whenever we look into the disk of our galaxy, we see more stars; whenever we look perpendicular to the disk, we see less.

In the same way, the White Dwarfs producing the background of galactic binaries are not distributed uniformly in the sky – they, too, are concentrated in the disk of our galaxy. As LISA orbits the sun, trailing behind the earth, its orientation will change continuously, and after one year and one full orbit, the cycle will repeat. But for LISA, like for all gravitational wave detectors, orientation is important. For any given orientation, LISA will be much more sensitive to gravitational waves coming from some directions than to waves coming from certain other directions. With the continuous changes in orientation, there will be times when LISA is most sensitive with regard to gravitational waves coming from those regions of the night sky that contain more White Dwarf binaries – namely the band of the Milky Way – and times when it will be less sensitive. Correspondingly, there will be times when the waves from the background binaries will lead to a stronger noise and times when their noise will be weaker. This characteristic modulation with a period of one year will allow the data analysts to unambiguously distinguish between the white dwarf background noise and other types of noise – notably from noise produced in the detector itself.

The following image shows how the background should look to LISA. The horizontal direction represents time (in years), the vertical direction represents the gravitational wave amplitude (multiplied by a factor of a hundred thousand billion billions, or 1022 in exponential notation). The up-down-up-down of the waves is much too fast to show up distinctly in this plot – at this resolution, a sine wave would just look like a solid horizontal strip, as you wouldn’t be able to distinguish one crest (or trough) from the next. What you can see, however, is how the overall strength of the waves detected varies over time. The image covers a time period of three years; each year exhibits two humps in which the total background amplitude is at a maximum, and two slender waists where it is at a minimum: 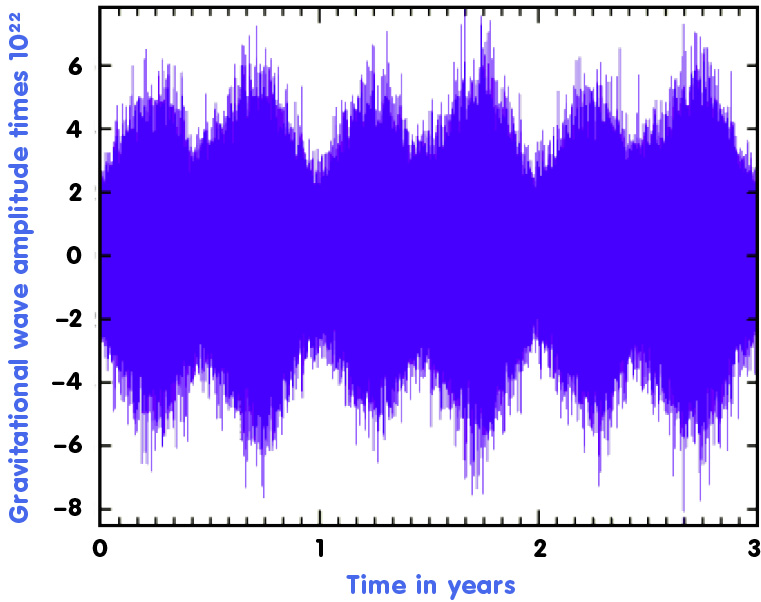 is a professor at the Institute of Mathematics of the Polish Academy of Sciences. His area of research encompasses gravitation and general relativity.

Hunting for extra dimensions
A brief history of gravitational lensing

sine
The sine, written sin(x), is a mathematical function that is perfectly regular and repetitive, with maximal and minimal values following each other in endless procession. The function is plotted here:

Interactions are all the different ways in which elementary or compound particles can influence each other. In elementary particle physics, "interaction" and "force" are used synonymously.

In the standard model of elementary particles, there are three fundamental interactions: electromagnetism, the strong nuclear force and the weak nuclear force. For another interaction, gravity, there is no quantum description yet.